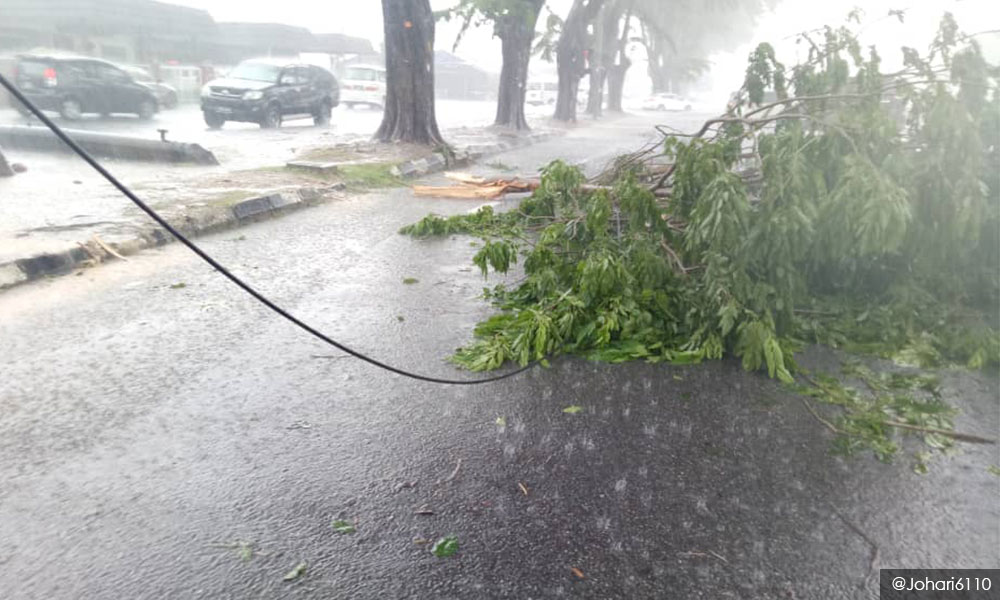 Strong winds and thunderstorm, which began at 8pm caused damage to business premises and private properties and uprooted trees in numerous locations in Perlis, Langkawi, Kedah and Penang.

The Malaysian Meteorological Department had earlier issued a warning of thunderstorms, heavy rain and strong winds over the states of Perlis, Kedah, Penang and Perak to occur until 2am today.

In Kedah, a female motorcyclist died when she was hit by a car after she was thrown onto the road when a ‘flying’ zinc roof hit her in front of the Sharifah Fatimah Mosque in Jitra.

“The mishap occurred during the thunderstorm. The car driver was unable to see the victim who was lying on the road and eventually ran over her,” he told Bernama.

Kedah Fire and Rescue Department assistant director (Operation) Mohamadul Ehsan Mohd Zain said they had received 23 complaints on uprooted trees so far and efforts were being mounted to remove it.

“Many houses and vehicles were damaged by fallen trees and branches. There were also trees that were uprooted and fell on the main roads, causing traffic obstruction,” he said in a statement.

He said that the authorities were still collecting more information on the damage caused by the storm.

“The report will be updated from time to time. For now, the coordination of disaster management is being done with other agencies at the affected areas,” he added.

Meanwhile, a restaurant operator in Jalan Pantai Cenang, Abdul Rashid Yahya, 43, said he and more than 10 customers ran helter-skelter when the plastic tables and chairs outside the restaurant were blown off by strong winds during the storm.

“We all ran inside the restaurant and I asked my son Muhammad Izuwan, 11, who is a tahfiz student, to recite the Azan, and to our surprise, the storm subsided," he said.

A food truck worker, Muhammad Najri Rusyaidie Azri, 18, said he was preparing a customer’s order when he saw a water sprout swirled towards the area.

“My colleague and I quickly packed things up and rushed into a nearby shop for safety.

“We saw two cars damaged by fallen roofs and power cable was snapped,” he said.

“All the five victims are local residents and traders in Bagan who were hit after their roofs and stalls were blown off by winds. Most of them sustained cuts on the body and head,” he said.

Penang Fire and Rescue Department spokesman, when contacted, said no death was reported so far.

“We are working closely with the local authorities in removing the fallen trees from obstructing the traffic,” he said.

In Perlis, the thunderstorm had also damaged many houses and business premises.

Bernama checks also found that the stalls and tents put up at Dataran 350 in Kangar in conjunction with Hari Raya Aidiladha, were blown off by strong winds.

environment
thunderstorm
perlis
kedah
penang
langkawi
Related Reports
Japan hit by torrential rains, orders 800,000 to evacuate
a year ago
68 dead after floods, landslides hit Sulawesi
a year ago
More than 22,000 evacuated after flooding and major landslide in Kerala
a year ago
Death toll in Nepal rains rises to 47, dozens missing, injured
a year ago