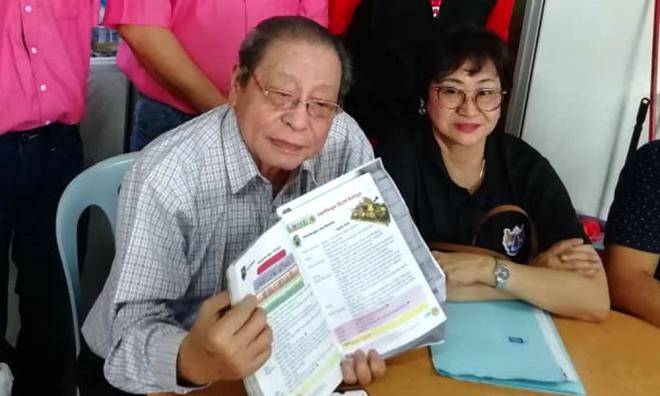 DAP parliamentary leader Lim Kit Siang defended his position on introducing Jawi khat (calligraphy art) lessons in the Year 4 Bahasa Malaysia textbook despite being heckled by unhappy voters over the matter at an event in his constituency last night.

The government had slashed khat lessons from six pages to three pages in the textbook and made it optional after strong objection from the non-Malay community but some constituents who were still unhappy jeered at Lim when he sought to explain the matter last night.

"Chinese, Malays and Indians are afraid of each other and live in fear. We must have the confidence to build a great Malaysia together.

"We're in a situation where Malays fear Chinese and Chinese fear Malays. In the past, the DAP is accused of trying to destroy Malays and now the DAP is being accused of betraying the Chinese.

"We need to come out of this. Our culture cannot disappear so easily... If only three pages (of Jawi lessons) can make Chinese culture disappear then I think there is a problem," the Iskandar Puteri MP told a press conference in his constituency this morning.

The non-Malay community have given various reasons for their objection to the khat lessons, ranging from its relevance to fear of Islamisation as Jawi, though it is the predecessor of the current romanised script for Bahasa Malaysia, is often associated with Islam.

Lim said he acknowledged the anxiety of the non-Malay community but said there is also a need to adopt a wider perspective.

He said the DAP has consistently fought against any attempts at assimilation but at the same time, it did not want segregation. Integration, he said, is the way forward.

He said the four great civilisations are the Chinese, Indian, Islamic and Western and their strengths should be derived to create a Malaysian one.

"We want all races to understand each other better," he said.

He also addressed criticism that the introduction of khat would open a floodgate, pointing out that khat was already introduced in the Year 5 Bahasa Malaysia textbook under the previous BN government.

"I am not blaming anyone but we want to talk about floodgates then it was already introduced but my point is that we need to look at things through a wider perspective," he said.

"I was not forced down nor chased away," he said.

Here is why some people are Islamophobic
10 Aug 2019
Angered by khat issue, Kit Siang's Johor constituents heckle him
9 Aug 2019
Khat has everything to do with religion
6 Aug 2019
PAS calls on DAP ministers to quit cabinet if in conflict
6 Aug 2019