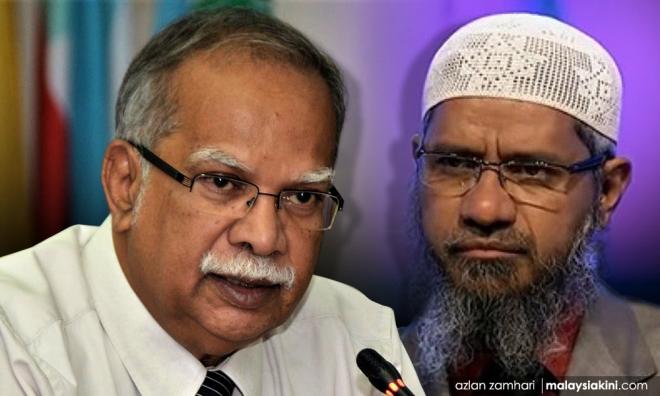 ADUN SPEAKS | Zakir Naik in his speech in Kota Baru recently cannot even make a simple or rudimentary comparison between Hindus in Malaysia and Muslims in India.

You cannot compare for the sake of comparison merely to endorse your religious or political arguments. Naik’s argument was simple - that the Hindu minority in Malaysia enjoys more than 100 rights in comparison to the Muslims in India.

I am not sure on what basis that Naik can say that Hindus enjoy more than 100 percent benefits in Malaysia in comparison with Muslims in India. While in Malaysia, there is a difference between the Malays and non-Malays on the grounds of whether they are indigenous or not, there is no such difference in India.

The constitution of India, a secular one, does not discriminate its citizens on the grounds of any racial, religious or regional backgrounds.

Unlike the Malay-Muslims who have certain rights protected by the Malaysian constitution, Hindus or non-Malays do not have special rights. They are citizens of the country entitled to certain constitutional rights to practice their religions and languages without any legal impediments.

So from a constitutional perspective, how can Hindus or non-Malays have superior rights over Muslims in India? This seems to be the figment of the wild imagination of Naik.

I am not denying that discrimination does not exist in India or Malaysia. Muslims being a minority in India might feel that they are being discriminated against by the Hindu majority and the same thing can be said about the discrimination of Hindus in Malaysia when it comes to employment in the public sector, opportunities for scholarships and placement in universities.

The degree of discrimination might vary between India and Malaysia all depending on the actual circumstances. To say that Hindus in Malaysia are better off 100 times to Muslims in India is complete nonsense.

I am not sure whether Naik said this to obtain sympathy for the Muslim cause in India or to ingratiate himself with Malay-Muslims here. It is not clear.

This is the most preposterous statement coming from the so-called learned Islamic preacher, Naik. Naik might be well versed in Islamic theology, however, such expertise does not give him the authority to be an expert on everything under the sun.

The vast majority of Hindus in Malaysia are Tamils. They might be Hindus in the religious sense, but in the political and cultural sense, they are Tamils proud of their ancient Dravidian roots, the first inhabitants of the Indian subcontinent long before the arrival of the Aryans and Muslims.

Tamil Hindus whether they are in Tamil Nadu, India or Malaysia, have no strong affiliation towards the ideology of the political movements or parties that stem from northern India.

In Tami Nadu, the Indian Congress Party that governed India for many years had difficulty gaining a strong foothold in the state of Tamil Nadu. It could only form coalitions with the Dravidian political parties in Tamil Nadu.

Tamils in India might be very loyal to India, but when it comes to a political and cultural affiliation they would go along with their Dravidian parties. The present Bharata Janata Party or BJP is no different from the Congress Party of India.

In the last two federal elections in India, BJP under Modi could not even win one parliamentary seat in Tami Nadu. Such was the Tamil opposition to BJP, considered not sympathetic to regional Tamil rights.

In many ways, the Tamil Hindus here are not very different from their kind in Tamil Nadu. Since their ancestors came from India, they still maintain strong cultural and religious affinity with the country and not political loyalty.

Even if Tamil Hindus have political sympathies with political parties and movements in Tamil Nadu or India, they have little or no attachment or loyalty towards the BJP or even Modi for that matter.

Tamil Hindus are loyal to Malaysia. Let us not forget more than 80 percent of them supported Pakatan Harapan under the leadership of Mahathir during the last general election.

Is Naik aware of this fact or is he blind to the truth? To say that Hindus in Malaysia are Modi loyalists basically speaks not only of Naik’s ignorance but his intense hatred for the Modi regime.

Since he is a fugitive running from the Indian law, he wants to drag the local Hindus into his game of hatred against India and Modi. The Malaysian government should be aware that Naik is playing with fire by instigating religious hatred among the various ethnic communities in Malaysia.

Naik can preach about Islam all he wants but he must stop from dragging the non-Muslims into this diabolical hatred game of his.