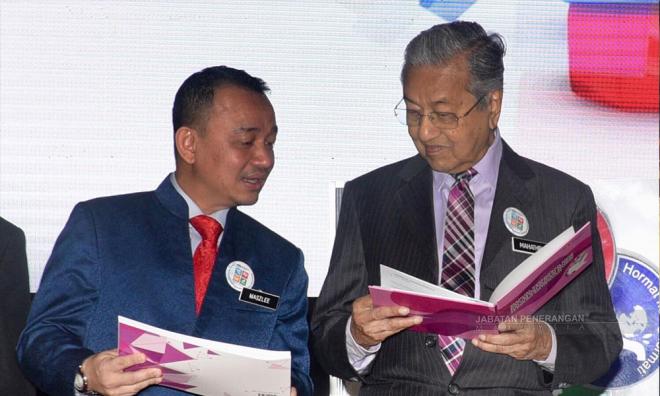 "The statement linking Mahathir to unilateral decisions is baseless and a blatant lie," he said in a statement today.

Maszlee was referring to the DAP lawmaker's statement yesterday which blamed Mahathir for several controversies such as the issues involving khat, Zakir Naik and Lynas and urged for the prime minister's powers to be curbed.

The education minister stressed that in all meetings he had attended in which Mahathir was involved, the prime minister had often sought consensus and appreciated feedback of every member in the meeting.

"I like to stress that the prime minister is a leader who prioritises the interest and views of all quarters and every decision made by the government or Pakatan Harapan are done collectively," he said.

Maszlee said other ministers can also testify to this.

"In issues such as the Rome Statute, Lynas, International Convention on the Elimination of All Forms of Racial Discrimination (Icerd) and various others, they were discussed and decided in a transparent matter through consensus," he said.

Santiago, in his statement, had also lamented that the government had made U-turns on various issues on top of the khat issue.

"Zakir has a permanent residency status in Malaysia although he is wanted by India for money laundering and terrorist activities.

"We bailed out on the Icerd. And of course, we turned our backs on the Rome Statute of the International Criminal Court.

"In the next week, the government will backtrack on its manifesto commitments when it renews Lynas' operating license. Why is Australian hazardous radioactive waste deemed safe for Malaysians?

"The government clearly doesn’t have a good track record to win the confidence of the people," the DAP MP had said.

The Education Ministry had initially proposed to introduce six pages of Jawi khat (calligraphy art) to the Standard 4 Bahasa Malaysia textbook, but this was reduced to three pages and made optional after strong pushback from the non-Malay community.

However, discontent persisted and the issue has degenerated into a racial and religious one as Harapan component parties attacked each other over the matter.

politics
mahathir mohamad
charles santiago
maszlee malik
Related Reports
Sarcasm unnecessary as criticism aimed at a better M’sia - Liu to Dr M
a year ago
DAP on collision course with Dr M as touchy issues pile up for cabinet meet
a year ago
Mahathir takes a sarcastic swipe at Lynas, khat critics
a year ago
Harapan presidential council should review policy decisions first
a year ago