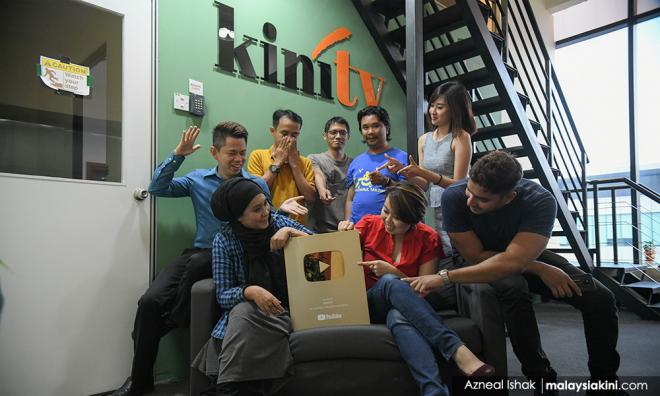 YouTube has awarded KiniTV with the 'Golden Play Button' Award for surpassing one million subscribers on the platform in May 2019.

The milestone comes a year after a record-breaking 7.2 million people tuned in to KiniTV to witness history being made through its 14th General Election coverage.

The 'Golden Play Button' is part of the YouTube's Creator Awards programme, which recognises its most popular channels.

KiniTV is considered the most subscribed news channel on the video platform in the country.

The building blocks for KiniTV were established in 2007, back when it was known as Malaysiakini.tv, and was renowned for its English-language coverage of various human rights issues, including the Hindraf and the first Bersih mega-rallies.

In 2013, Malaysiakini.tv was transformed into KiniTV. The transformation brought growth that allowed KiniTV to start reporting news in Bahasa Malaysia and Mandarin languages.

Following the 13th General Election, KiniTV diversified its range of content to include daily bulletins, documentaries, and explainer-videos with comprehensive data and animation.