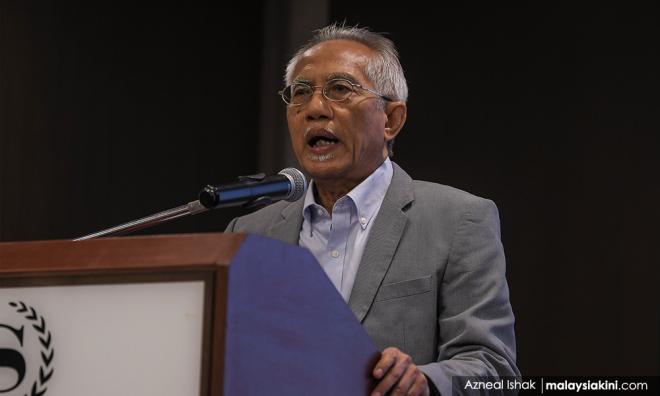 Malaysians have become more radical and racist due to the polemic regarding several peripheral issues, according to A Kadir Jasin.

In a hard-hitting blog posting today, the veteran newsman shared his views on the debate over Muslim preacher Zakir Naik and the introduction of khat (Jawi calligraphy) for Standard 4 pupils.

As for Zakir, he argued that it is the dim-witted who despite being saddled with numerous problems, would seek additional burdens or appropriate the burdens of others as well.

"We know that in India, Hindus killing Muslims and Muslims killing Hindus is a normal occurrence. Religious incitement is considered part and parcel of democracy.

"It is different in Malaysia. We respect each other's religions and beliefs," he added.

Kadir, who is Prime Minister Dr Mahathir Mohamad's media and communications advisor, said it is pointless for Pakatan Harapan to squabble over the Indian-born preacher.

"He (Zakir) is not our (Harapan's) creation. He was brought in and talk is that he was given (Malaysian) permanent resident status by the BN government," he added.

Kadir said if the preacher is as great as claimed by certain quarters, then no harm would befall him if he returned to his country of origin.

"Or he can go to whichever country. He can go to a country which is 100 percent Muslim like Saudi Arabia so that he can be free to preach without inciting any quarters.

"Or he can go to a non-Muslim country like the United States, Australia or European Union where Islam is spreading rapidly," he added.

Zakir is wanted by Indian authorities over alleged money laundering charges, which the preacher claims are fabricated.

Tighten rules for foreign preachers of all faiths

Kadir said Muslims in Malaysia are not only divided because of politics but also religious dogma brought back by Malaysian students who pursued their education in failed states and foreign preachers from failed Islamic states.

"I implore once again. Enough of wasting time on trivial issues and entertaining skewed idealism and irrational thinking.

"Forgive me for saying this, but the manner in which some people defend Zakir is as if he is more important than the millions of Felda settlers, Felda's small-scale farmers, paddy farmers, fishermen and PPR residents," he added.

"I am puzzled why we are so 'gila' (crazy) about importing preachers like Zakir? Does this mean our Islamic education system and Islamic scholars do not have traction?" he asked.

On the same note, Kadir urged the authorities to tighten the requirements for foreign preachers regardless of faith who come to Malaysia.

"If a preacher violates the entry requirements, especially threatening public order, (he or she) should be penalised and this includes being expelled from the country.

"In this context, I can understand and sympathise with the cabinet members, including Syed Saddiq Abdul Rahman, whom I always pray would become prime minister someday, for wanting Zakir to be removed from our country," he added.

Shifting his focus to khat, Kadir called for an end to the debate on this issue.

"Forgive me for saying this, it (arguing over this) will not take us anywhere... (learning) khat is pointless when you cannot write or read Jawi...

"Perhaps our education minister (Maszlee Malik) is a genius and people like us with average intellect are unable to fathom his actions.

"What worries me more is not whether to learn khat or otherwise but the lacklustre quality of our education (system) and the failure of the dual language policy," he said, adding that at present, proficiency in both English and Bahasa Malaysia remains poor.

On another matter, Kadir also felt it would be appropriate for the Yang di-Pertuan Agong to revoke the Tan Sri title bestowed on Gamuda Bhd founder Koon Yew Yin for insulting the armed forces.

"It is dangerous when a Tan Sri makes a statement which denies the contribution of the armed forces.

"He (Koon) has been criticised and he has apologised. But I feel it is appropriate for the Agong to revoke the title because the Agong is also the commander in chief of the armed forces," he added.

The tycoon courted flak when he said armed forces personnel do nothing "except eating and sleeping."

He claimed most have never fired a shot outside "target practice" and suggested they be deployed to work in Felda plantations instead.

Koon has since apologised for the wording of his posting, which he said was meant as a suggestion on how to reduce the size of the civil service.