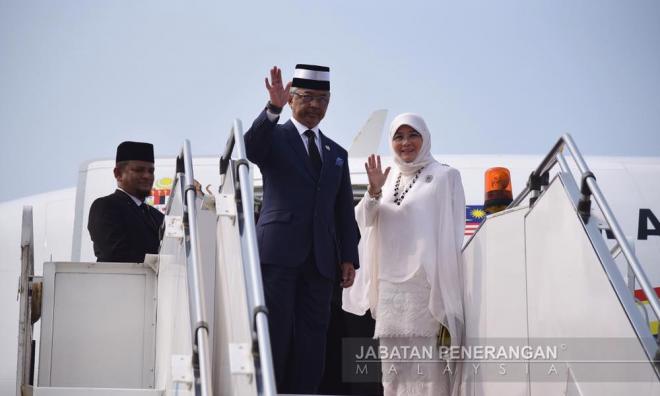 The special aircraft bringing the Royal couple touched down at the Brunei International Airport here at 1.10pm.

Their Majesties were given a red carpet welcome.

His Majesty then inspected a guard-of-honour mounted by a 26-strong team of the Royal Brunei Army led by Lieutenant Mohd Yusof Ibrahim.

Brunei is the first country visited by Sultan Abdullah since his installation as the 16th Yang di-Pertuan Agong on July 30.

The visit is aimed at further boosting the existing close ties between both countries.

Bandar Seri Begawan is heavily decorated with the Jalur Gemilang (Malaysia’s national flag) and the Brunei flag as a goodwill gesture to welcome His Majesty’s visit.

The Royal couple is scheduled to attend a banquet with the Malaysian diaspora here tonight.

Tomorrow, their Majesties will be accorded a state welcome at Istana Nurul Aman.

Their Majesties are later scheduled to visit the Royal Regalia Museum.

In a separate programme, Sultan Abdullah will visit the Royal Customs and Excise Wharf and Kampong Ayer, while Tunku Azizah will visit the Brunei Arts and Handicraft Training Centre and Girl Guides Association Headquarters.

In the evening, their Majesties will attend a royal banquet at Istana Nurul Iman.

On the final day, Sultan Abdullah is scheduled to visit the Islamic Religious Council of Brunei while Tunku Azizah will visit the Women's Institute in Tutong before their departure home.