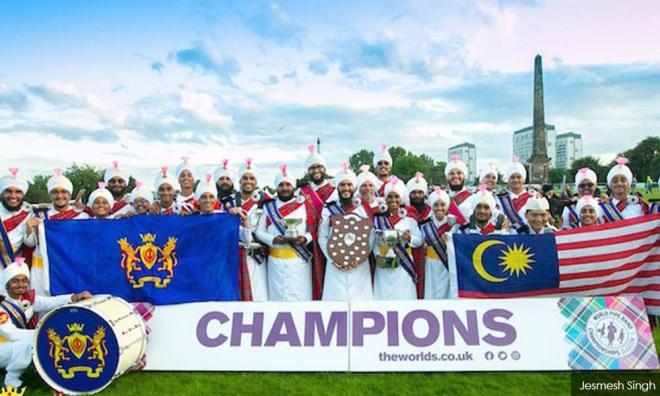 The amazing feat at Glasgow capped months of diligent training and a single-minded push to display their very best at the pinnacle of the competitive pipe band competition.

According to Asia Samachar, an independent news portal for Sikhs in Southeast Asia, the Sri Dasmesh Pipe Band was named as champs of Grade 4B.

The band emerged tops for overall and drumming as well as best parade.

This is the second time the Malaysian band took part in the world series organised by the Royal Scottish Pipe Band Association.

Up to 8,000 pipers and drummers from 195 bands converged at the Glasgow Green in the last two days.

Sri Dasmesh – named after the tenth Guru of the Sikhs and the only Malaysian pipe band at the event – was formed in 1986 by Sukdev Singh, a commercial pilot and director of an international school by the same name, with his brother Harvinder Singh.

The team is scheduled to arrive at Kuala Lumpur International Airport at 10pm on Monday.