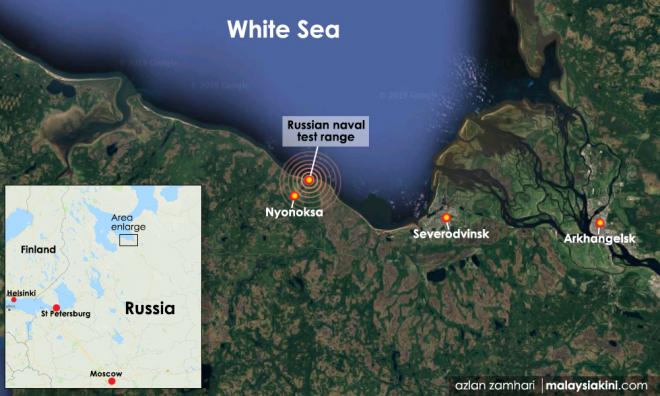 The operator of a global network of radioactive-particle sensors said on Monday its two Russian sites closest to a mysterious explosion went offline days after the blast, soon followed by two more, fuelling suspicions that Russia tampered with them.

The Russian Defence Ministry, which operates the two stations, did not immediately reply to a request for comment.

Russia’s state nuclear agency, Rosatom, has acknowledged that nuclear workers were killed in the explosion on Aug 8, which occurred during a rocket engine test near the White Sea in far northern Russia.

The explosion also caused a spike in radiation in a nearby city and prompted a local run on iodine, which is used to reduce the effects of radiation exposure.

Russian authorities have given no official explanation for why the blast triggered the rise in radiation. US-based nuclear experts have said they suspect Russia was testing a nuclear-powered cruise missile vaunted by President Vladimir Putin last year.

The CTBTO’s International Monitoring System includes atmospheric sensors that pick up so-called radionuclide particles wafting through the air. Zerbo said data from stations on or near the path of a potential plume of gas from the explosion were being analysed.

While the CTBTO’s IMS network is global and its stations report data back to CTBTO headquarters in Vienna, those stations are operated by the countries in which they are located.

The two Russian monitoring stations nearest the explosion, Dubna and Kirov, stopped transmitting on Aug. 10, and Russian officials told the CTBTO they were having “communication and network issues”, a CTBTO spokeswoman said on Monday.

“We’re awaiting further reports on when the stations and/or the communication system will be restored to full functionality.”

It is not clear what caused the outage or whether the stations were tampered with by Russia.

Zerbo also tweeted a simulation of the explosion’s possible plume, showing it reaching Dubna and Kirov on Aug 10 and Aug 11, two and three days after the explosion.

The spokeswoman said later that two more stations, Bilibino and Zalesovo, stopped transmitting data on Aug 13. Bilibino is in far eastern Siberia, outside the map of the simulated plume that Zerbo tweeted. But that simulation also showed the plume reaching Zalesovo on Aug 13.

“About 48 hours after the incident in Russia on Aug 8, these stations (Dubna and Kirov) stopped transmitting data. I find that to be a curious coincidence,” said Daryl Kimball (below), executive director of the Arms Control Association, a Washington-based think tank.

He and other analysts said any Russian tampering with IMS stations would be a serious matter, but it was also likely to be futile as other IMS or national stations could also pick up telltale particles.

“There is no point in what Russia seems to have tried to do. The network of international sensors is too dense for one country withholding data to hide an event,” said Jeffrey Lewis, director of the East Asia Non-Proliferation Programme at the Middlebury Institute in California.

Rosatom has said the accident, which killed five of its staff, involved “isotope power sources”.

The CTBTO's IMS here comprises more than 300 seismic, hydro-acoustic, infrasound and radionuclide stations dotted around the world that, together, are aimed at detecting and locating a nuclear test anywhere.

Its technology can be put to other uses, however, such as when the CTBTO passed on data from two hydro-acoustic stations to Argentina in 2017 to help locate the wreckage of a missing submarine.