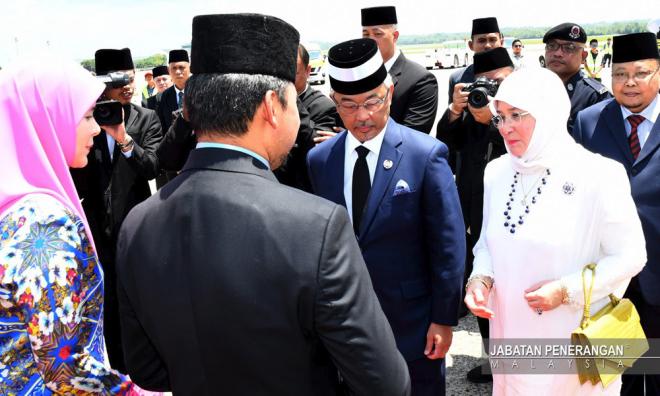 Sultan Abdullah’s first state visit following his installation as the 16th Yang di-Pertuan Agong on July 30 was a reflection of the strong and unique ties between the two countries through the Malay Sultanate connection.

Comptroller of the Royal Household of Istana Negara Ahmad Fadil Shamsuddin, summed up the state visit as one of the most unique starting points for the close relationship between the two Malay rulers.

He said Sultan Abdullah expressed his satisfaction and appreciation over his first state visit as the country's head of state because it had strengthened the ties that had been established for the last 35 years.

“His Majesty has expressed his satisfaction over the state visit where Sultan Hassanal Bolkiah and Sultan Abdullah have strengthened the unique relationship between them.

"For Istana Negara, this (visit) is unique, where in 1984 Almarhum Paduka Ayahanda Sultan Haji Ahmad Shah as the seventh Yang di-Pertuan Agong visited Brunei and this time his son, Al-Sultan Abdullah, made a state visit," he told Malaysian reporters covering the state visit here.

The visit also commemorates the historic visit of His Majesty’s late father, Paduka Ayahanda Sultan Ahmad Shah, as the first Yang di-Pertuan Agong to make a state visit to Brunei soon after the sultanate gained its independence in 1984.

Ahmad Fadil said the close cooperation between the two countries was evident from an economic standpoint with Malaysia’s exports to Brunei last year amounting to nearly US$600 million (RM2.51 billion) while Malaysia's import value was about US$450 million (RM1,673 million).

Both heads of state expressed confidence that the spirit of brotherhood and close friendship between Brunei Darussalam and Malaysia would continue.

"Through this close relationship, we enjoy a network of partnerships in various fields, including trade, defence, security and education for our common interests," Sultan Hassanal Bolkiah said at the royal banquet at Istana Nurul Iman on Monday night.

Sultan Abdullah said the success of relations between Malaysia and Brunei was achieved on the efforts and forward-looking nature of the two governments based on the annual consultations between the leaders of the two countries.

“This approach has been a pillar of cooperation between the two countries in discussing various issues to reach a decision that will benefit both Malaysians and the people of Brunei Darussalam. Through this approach, the economic relationship between Malaysia and Brunei Darussalam is strengthened,” he said.