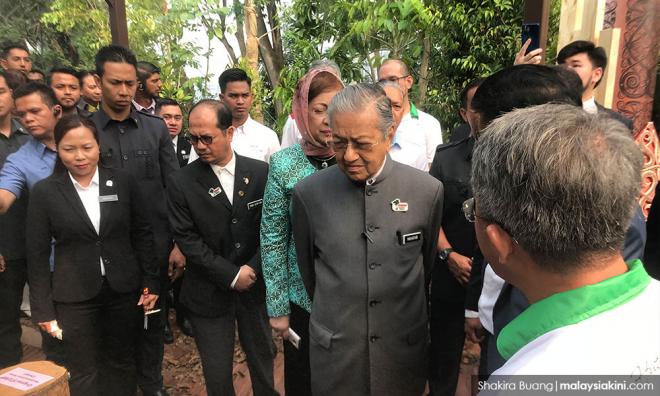 “Malaysia has been accused of putting the need for development before the needs of our forests and the issue of deforestation for oil palm plantations has always been championed by our detractors,” he said.

He said these claims bring a negative impact to Malaysia which depends highly on the palm oil industry to raise the socio-economic well-being of the people, in order to help Malaysia achieve the Sustainable Development Goals (SDGs).

“It has also significant detrimental effects on oil palm growers who include 650,000 smallholders as well as another 1.5 million people employed throughout the palm oil supply chain.

“The truth is, the palm oil industry in Malaysia has been developed sustainably and responsibly ... the government, in adhering to the SDGs, has put in measures to ensure this industry does not cause environmental degradation as well as to avoid unsustainable practices such as the destruction of forests and wildlife habitats,” he said in his speech when opening the Hutan Kita (Our Forests) exhibition at the Kuala Lumpur Tower here.

The "Hutan Kita - Journey through our Rainforest" exhibition is being held at the Tower Terrace of the Kuala Lumpur Tower from Aug 24 to Sept 22. It is organised by the Ministry of Water, Land and Natural Resources.

Mahathir said the Malaysian palm oil industry is now focusing on improving productivity and yields rather than expanding land, to avoid deforestation and direct or indirect land-use change.

He said that apart from that, restrictions on the planting of oil palm on peatland as well as permanent reserved forests have also been imposed.

“Malaysia stands proud to share some of our sustainable practices with the world. Malaysia introduced the Malaysian Sustainable Palm Oil (MSPO) Certification Scheme in 2013 and (it) will be made mandatory commencing Jan 1, 2020,” he said.

He said the certification, wholly and clearly, addresses global concerns on the sustainable production of palm oil, including that of biodiversity loss, greenhouse gas (GHG) emissions and the destruction of wildlife habitats.

Mahathir also said that Malaysia has not reneged on the pledge he made at the Rio Earth Summit in 1992 that the country is committed to maintaining at least 50 percent of the landmass under forest cover.

“Malaysia’s forest cover is currently at 55.3 percent or 18.28 million hectares of our total land area, exceeding Malaysia’s initial commitment made at the Rio Earth Summit when I was the prime minister back then.

“This represents the nation’s will and commitment to conserve and sustainably manage our forest, its flora and fauna,” he said.

The prime minister said that unlike many nations which relied on the finite natural resources such as fossil fuels or minerals, Malaysia has been blessed with a renewable resource which, when managed carefully, will continue to provide for the nation indefinitely.

He said Malaysia has been taking comprehensive measures to ensure that the country’s economic development does not come at the undue sacrifice of its natural resources.

Mahathir said that by implementing programmes for poverty eradication, forestry management and protection of the country’s rich biodiversity, Malaysia has worked hard to ensure that economic development and environmental conservation go hand in hand.

“Having said that, although Malaysia has put in place various efforts to prevent forest loss, we still face challenges from our growing socio-economic development needs.

“The increasing population of Malaysia brings with it increased demand for food, water and infrastructure, which places pressure on our forests,” he said.

Mahathir said that as one of the world’s most biodiverse nations, Malaysia takes its commitment to conservation seriously and is proud to be a signatory to an extensive list of global treaties on conservation, wildlife, forestry and the environment.