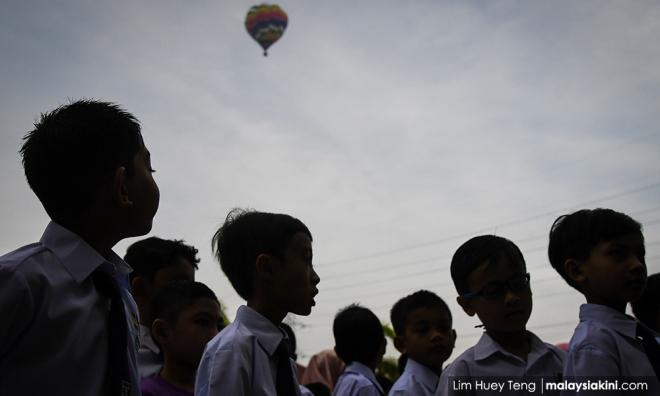 YOURSAY | ‘Malaysian parents are more pragmatic than you think.’

Kunta Kinte: There’s been a lot of talk about single-stream schooling, but no concrete action.

When I was schooling, the national schools were the school of choice. The vernacular schools were a dying breed.

Unfortunately, someone decided to turn national schools into Malay schools, and worse still, Islamic schools. Subsequently, you see the resurgence of vernacular schools.

Make national schools the school of choice. I am sure the dream of single-stream schools is not too far-fetched a thought. Malaysian parents are more pragmatic than you think.

A major overhaul is needed to put them on the right footing again, but don't hold your breath.

6th Generation Immigrant: Are Chinese Malaysians really against the single-stream proposal, or are they merely upholding an existing solution towards an all-around education for the Malaysian young of all races?

As with any addiction, affliction, and missteps; the route to the cure is admission, confession, and acceptance.

No one seems to think aloud and publicly that Malaysia's education system and philosophy are totally flawed, and without such an admission, the treatment and cure will not be forthcoming - the Chinese will remain the bogeymen.

Having said all that, we also need to ask if our national schools have ever produced any Malaysian that can be described as an international intellectual, a religious thinker, inventor, statesperson, et cetera.

In truth, the clinging on to the Islamic preacher Dr Zakir Naik and his ideals reflect poorly on our education system – the ones that were devised after 1970.

Our education system produces dependents - that's what the Chinese are against, and not the single-stream that is of no use for the future.

Anonymous_1527925538: Instead of forcing the parents to send children to national schools, first make sure and prove it to them that the standard and discipline at national schools are better than the vernacular schools.

Otherwise, it will only cause a lot of resentment and political tension.

YTMQ: Yes, how about focusing on finding ways to significantly improve the quality of education at the national schools to be on par with the most advanced countries, so that parents of all races would really like the idea of sending their kids to national schools?

How about finding ways for our national schools to be less reliant on rote learning, and more reliant on meaningful learning techniques, so that our kids could better prepare themselves and our country, for the next phase of global competition?

How about discarding Prime Minister Dr Mahathir Mohamad's old style of not working towards improving the quality of education, but instead use this as an opportunity to bash fellow Malaysians on account of racism?

David Dass: Rembau MP Khairy Jamaluddin has said it. Make national schools the best schools in the country. Make the schools more hospitable to non-Malays. Teach pupils their own language and culture, even allow the teaching of own religion. Teach some subjects in English.

When parents see the improved national schools, they will drift back to government schools. Some of the improvements can be incorporated into vernacular schools.

More non-Malay kids should be encouraged to attend Chinese schools as they are better resourced. In time, they will be perceived as Malaysian schools. As they are in Sabah and Sarawak.

Our children should attend the same schools. They should study and play together. They should become friends with each other. That is the way to secure the country. And all our futures.

Wira: The Chinese objection to single-stream schooling is very simple to understand:

1. They need to be better prepared for better employment opportunities. The public sector is shut to them. Knowledge of another world language makes them more globally competitive.

2. They need to be better prepared for educational opportunities elsewhere since public university quota may not give them the course of their choice.

3. Since they have almost zero opportunity for the civil service, many find a basic working knowledge of Malay would suffice. A secondary education in a national secondary school would do. It is unnecessary and futile to be extremely proficient in Malay.

Anonymous_1371482984: Why are we talking about single-stream education without talking about Mara colleges and university, and the religious schools?

Vernacular schools are here to stay, and if this is open to change, so must all the accepted compromises made before. It cannot be a one-way street.

Spinning Wheels: The survey is not asking the right questions. It should be asking whether national schools or vernacular schools provide a better education – my guess is it’s the latter.

It’s up to the government to improve education at national schools so that it draws all students to its schools. Nobody wants to pay more than necessary to educate their children.

Existential Turd: I am all for a single-stream education system, just not the kind administered by our decrepit Education Ministry in the last four decades.

Malaysiakini should commission a different survey. Please ask the respondents what kind of education system they prefer to be in the single-stream schools. You will get very different answers.

The Wakandan: You can have the survey, but this cannot be determined by the majority because it is about the right to an education of your choice.

The minority have their rights, which the majority cannot override. It is not like an election.

SPECIAL REPORT coming up this week: Whither integration? How our children are growing up in separate bubbles

yoursay
education
politics
children
race & religion
education and unity
Related Reports
Muhyiddin calls to cool down on race, religion and royalty
a year ago
Don't raise the temperature, Anwar urges organisers to scrap rallies
a year ago
Yoursay: The problem is national schools, not vernacular schools
a year ago
Pray for national security, not just Zakir Naik - Pahang mufti to PAS
a year ago