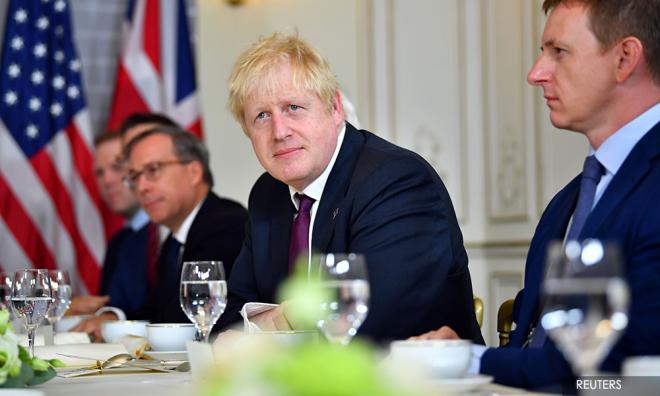 US President Donald Trump promised a big trade deal for post-Brexit Britain to Boris Johnson on Sunday and praised the new prime minister as the right man to take Britain out of the European Union.

Johnson, who faces a delicate task of assuaging European allies while not angering Trump at a G7 summit in France, said trade talks with the United States would be tough but there were huge opportunities for British businesses in the US market.

Speaking to reporters with Johnson ahead of a trade-focused bilateral meeting, Trump said Britain’s membership of the EU had been a drag on efforts to forge closer trade ties.

With less than three months until an Oct 31 deadline, it is still totally unclear, how, when or even whether Britain will leave the EU. The uncertainty around Brexit, the United Kingdom’s most significant political and economic post-war move, has left allies and investors aghast and roiled markets.

Opponents fear Brexit will make Britain poorer and divide the West as it grapples with both Trump’s unconventional presidency and growing assertiveness from Russia and China.

Supporters acknowledge the divorce might bring short-term instability, but say in the longer term it will allow the United Kingdom to thrive if cut free from what they cast as a doomed attempt to forge European unity.

Trump and Johnson were in the French seaside resort of Biarritz for a summit of G7 industrialised nations that exposed sharp difference over trade protectionism and an array of other issues including climate change and digital taxes before it had even begun.

Johnson will on Sunday meet European Council head Donald Tusk, who on Saturday said Johnson would go down as “Mr No-Deal” if he took Britain out of the EU without a withdrawal agreement.

Johnson is expected to tell Tusk that Britian will only pay £9 billion (RM46 billion) instead of the £39 billion (RM200 billion) liability agreed by former prime minister Theresa May under a no-deal Brexit, Sky News reported on Sunday.

On his arrival on Saturday, Johnson said in reference to the escalating US-China trade war he was “very worried” about the growth of protectionism. He said those who “supported tariffs were at risk of incurring the blame for the downturn in the global economy."

Sitting opposite Trump on Sunday, Johnson praised the performance of the US economy before adding: “But just to register a faint, sheeplike note of our view on the trade war – we are in favour of trade peace on the whole.”

Johnson used a pre-summit phone call to Trump to demand he lower trade barriers and open up parts of the US economy to British firms, citing a wide range of markets from cars to cauliflowers.

Britain was looking forward to some comprehensive talks about taking the future UK-US relationship forward, Johnson said, adding he had made clear to Trump that the National Health Service would not be a part of trade talks.

London’s preference is for a comprehensive free trade deal with the United States post-Brexit, UK government officials say, while some US officials including Trump’s national security adviser John Bolton have talked of a sector-by-sector approach.

Hints of those divisions emerged on Sunday.

As Johnson said London and Washington would do a “fantastic deal”, Trump interrupted to say: “lots of fantastic mini-deals, we’re talking about many different deals but we’re having a good time.”