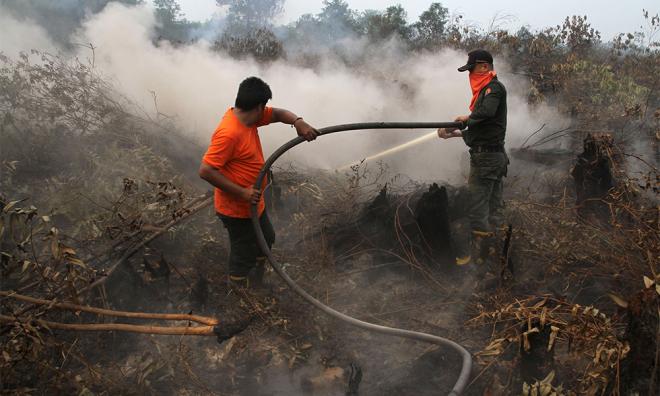 Strong winds over the past few days caused the forest fire at Kampung Pekajang in Iskandar Puteri, near Johor Bahru, to spread to a new area of 98ha today as opposed to just 16ha last Friday.

However, Johor Fire and Rescue Department director Yahaya Madis said the department had worked hard for 24 hours to handle it and had extinguished 45 percent or 44ha of fire.

The operation was carried out by 79 members including senior officers from 10 stations in Zone 1 Johor and a station from Zone 2 Johor.

In addition, five 20,000-litre capacity water tankers were used to transport water taken from nearby fire hydrants to extinguish the fire.

He added that the source of the water had to be taken from a nearby fire hydrant because the existing river in the area could not accommodate the extinguishing operation.

"Today it drizzled a little and thus did not have much effect on the extinguishing operation. Based on the current situation, it is expected to take four days.

"But if the 'flooding' technique can be completed immediately, there is a possibility that the fire will be extinguished soon," he said when contacted by Bernama today.

Yahaya said some people had suggested that cloud seeding activities be carried out in the area to assist in the firefighting operation and the proposal was voiced by the state Housing, Communications and Multimedia Committee chaired by the Kota Iskandar assemblyperson Dzulkefly Ahmad.

"Following the proposal, the Meteorological Department was present at the site of the fire to observe the formation of clouds but the result would probably be 50 percent successful due to low cloud moisture," he said.

The fire started on Friday afternoon due to the dry weather in the state.