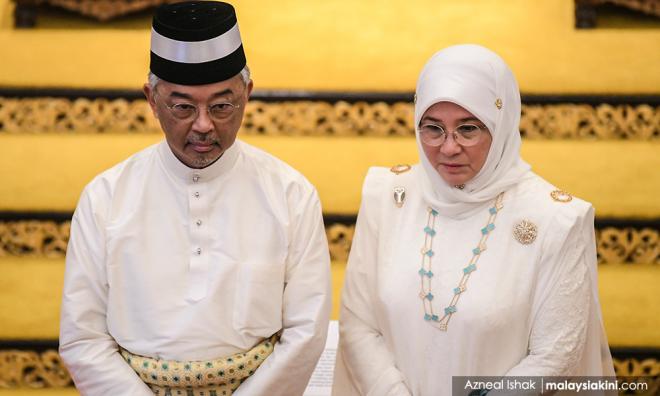 The Yang di-Pertuan Agong, Al-Sultan Abdullah Ri'ayatuddin Al-Mustafa Billah Shah, called on Malaysians today to demonstrate unwavering loyalty to the King and country and not belittle the sacrifices of those who maintain peace and harmony.

He said Malaysia went through a lot in order to become a sovereign and independent nation, and that peace is the biggest blessing that the people should be grateful for.

"Therefore, I urge all Malaysians, no matter where they are in the world, to show their unwavering loyalty to the King and country," he said at a high tea with the Malaysian diaspora as he began a four-day state visit to Indonesia today.

Sultan Abdullah said his visit, with Raja Permaisuri Agong Tunku Hajah Azizah Aminah Maimunah Iskandariah, after being installed as Malaysia's 16th Yang di-Pertuan Agong on July 30 is to boost relations and cooperation between the two countries.

"It is also to express our gratitude to the Indonesian government which has given citizens and companies of Malaysia the opportunity to conduct business and operate in this country," he said.

Close to 12,000 Malaysians reside in Indonesia. They comprise professionals, entrepreneurs and students who have indirectly contributed to the economic well-being of the two countries and bilateral relations.

"I believe that if this communication networks can be strengthened, they can be used by the Malaysian embassy and government in delivering the government's aspirations to all Malaysians living in Indonesia," he said.

His Majesty also said that students and other Malaysians living in Indonesia should uphold their home country's reputation and image, be courteous, practice good work ethics, and respect the local laws and culture.

He said Malaysia and Indonesia share a very special and intimate relationship, based on strong ties in various aspects including history, religion, culture, race and language.

"I am very proud to see our friendly relations are at their best in various fields and levels, whether at the level of leaders or non-governmental organisations and at every level of society,” said Sultan Abdullah.

About 200 Malaysians attended the event. Also present were Economic Affairs Minister Mohamed Azmin Ali, as the minister-in-attendance, and the Malaysian ambassador to Indonesia Zainal Abidin Bakar.

Sultan Abdullah and Tunku Azizah, who flew into Jakarta today morning, will be accorded a state welcome tomorrow and will attend a state luncheon hosted by Indonesian President Joko Widodo and his wife at the Bogor Presidential Palace.

The royal couple is also scheduled to have an audience with the Sultan of Yogyakarta and Governor of the Special Region of Yogyakarta, Sri Sultan Hamengkubuwono X, and visit historical sites in Yogyakarta.