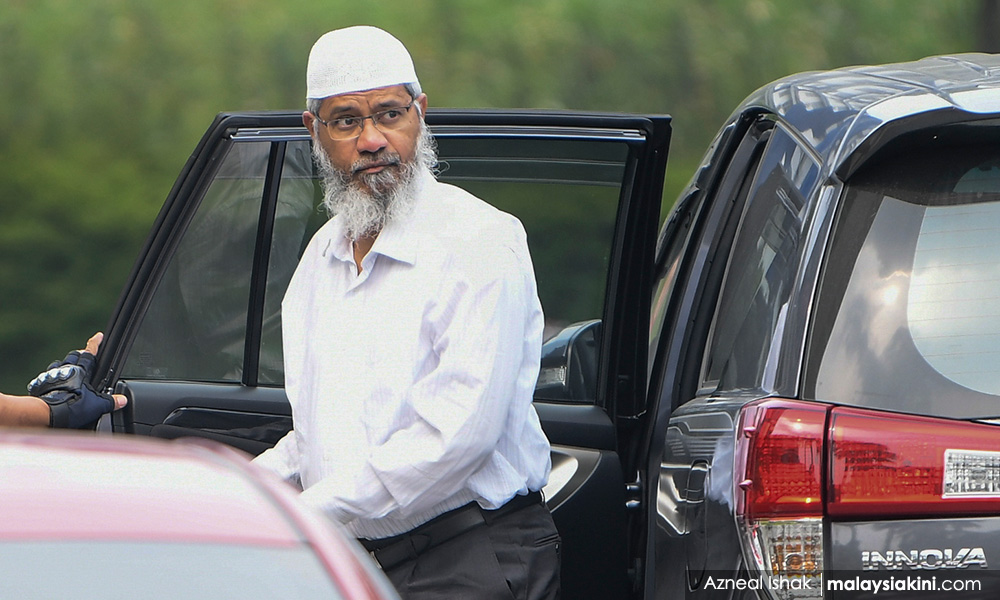 Why Zakir Naik's style of preaching is disrespectful

COMMENT | The Dr Zakir Naik controversy has brought the issue of accepting and respecting religious diversity to the fore.

There are some Zakir Naik supporters who defend his and their right to proselytise, that is, convert non-Muslims to Islam. By extension, they are saying he and they are therefore allowed to compare religions and to expose flaws and untruths in the religious beliefs of non-Muslims. And Zakir Naik as a self-proclaimed expert in comparative religion (whatever he and his followers think that means!) is eminently qualified to appraise, evaluate and validate or invalidate religious beliefs.

Simply stated, this means he is free to rubbish religions other than Islam, all in the cause of obtaining Muslim converts. Never mind the hurt and anger they cause. Because these 'truth and convert' sessions take place before large audiences, they can be quite disturbing. Especially as they are usually published in the form of YouTube videos.

But that is not the only problem.

Muslims, like non-Muslims, are free to listen to whichever preacher they want and to have any view they want of other religions. That is what freedom of religion means.

But there is a conundrum here for a multi-religious country like ours. Where our children attend the same schools. And where we engage with one another on a daily basis. How do we ensure that there is mutual respect for each other? How do we ensure peaceful co-existence when Zakir Naik’s religion bashing occurs before Muslim communities? Where non-Muslim religions and religious and cultural practices are portrayed in a negative light?

Everyone accepts that there are fundamental differences in the dogma of different religions. We even accept that when instructed in our respective faiths, there will be references to these differences. Most of the major religions have their source in revelation. That is, a prophet (or prophets) was given inspired insights into the supreme creator's plan for us.

Before such revelation, man (including women) attempted to give meaning to naturally occurring phenomena like lightning, thunder, earthquakes, volcanic eruptions, etc. Some saw supernatural properties in rocks and trees. But mankind has evolved, his consciousness grown, and with the advances of knowledge, more and more of the secrets of the universe are revealed. Earlier understanding of scripture is sometimes re-interpreted in the light of greater knowledge and understanding of things.

Man's quest for meaning to his existence is eternal. Of course, man's faculties for understanding the cosmos - of time and space, of time before time, of space beyond space, of infinity and absoluteness is limited. Some are smarter and more knowledgeable than others. For example, Albert Einstein and Stephen Hawking.

They saw a bit more than ordinary humans could, but the truth is most of us rely on what we are told by others as a basis for our faith. And these others spoke from spiritual experiences or encounters they had with celestial beings or with gods or God or their or his emissaries. And these revelations are set out in their holy books. And all adherents of a particular faith believe in the truths set out in their holy books.

And that is fine.

But sometimes, unfortunately, there is a contest of beliefs. Experts in religion challenge one another to debates as to the validity of their religious beliefs against the beliefs of others. These debates often deteriorate into religion bashing. The truth is religious belief, for the most part, is faith - belief in the unknown and the unknowable.

Religion bashing causes hurt, anger and forces people of the religions being attacked to defend their faiths. That defence may cause them to make critical remarks about the other faiths. And that will create tension and possible conflict. Hadi says that we should not condemn Zakir Naik, but should debate with him. Such debates will take us nowhere for the reasons given.

Instruction in one's own religion does not require the condemnation of other religions. Praying and worshipping your God does not require you to concern yourself in any way with how others pray and worship. Unless, of course, you think that there might be some value to you in your spiritual journey to understand the beliefs and practices of others. Many Christians study Hinduism and Buddhism for that reason, especially mindfulness and meditation.

Zakir Naik's style of preaching is disrespectful. It makes peaceful co-existence among members of different religions difficult, if not impossible. It is better for us to accept that we follow different pathways - and that is our right - and further accept that only God can decide whether we have lived our lives correctly or not. We should also accept that some Malaysians do not believe in God.

Freedom of worship is a fundamental liberty under our Constitution. As is the equality of all Malaysians whatever their race or their beliefs. So each is free to follow his spiritual path without opposition or hindrance. We also have to accept that there are 7 billion people in the world and they follow different belief systems. Muslims are a minority in many countries. All must respect differences. All must co-exist peacefully. Religion bashing only leads to conflict. Or to the persecution of minorities.

The days of the crusades are over. The days of conversion after conquest is over. This is the age of inter-religious dialogue where one studies the religion of another with the object of engaging with the other positively and constructively. We should preach peace, love, compassion, respect, charity and forgiveness. Not hate. Not intolerance.

Yoursay: Zakir, in Malaysia we don’t denigrate other religions