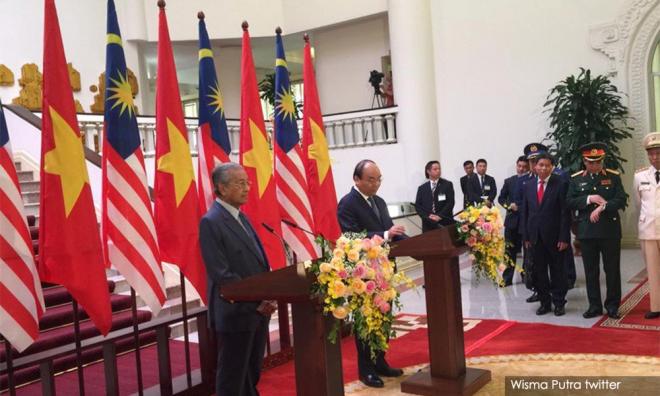 Mahathir was accorded an official welcome at the Presidential Palace where he was greeted on arrival by Vietnamese Prime Minister Nguyen Xuan Phuc.

Mahathir inspected the guard of honour before the national anthems of Malaysia and Vietnam were played.

Later, both leaders will hold a restricted meeting followed by a delegation meeting at the Prime Minister’s Office.

They are expected to discuss bilateral ties and also promote new cooperation initiatives in various fields including trade and investment as well as regional and international issues to strengthen the existing ties.

After the meeting, both leaders will witness an exchange of letters for the Establishment of Malaysia- Vietnam Parliamentary Friendship Group and followed by a joint media conference.

Mahathir arrived in Hanoi yesterday night for his official visit to Vietnam at the invitation of his counterpart, Nguyen.

The last time Mahathir embarked on a working visit to Vietnam was in 1998 to attend the Asean Summit and both countries have established diplomatic ties since 1973.

Vietnam is an important economic partner to Malaysia. Malaysia and Vietnam set to achieve US$15 billion (RM63 billion) trade by next year compared to US$13.3 billion (RM55.7 billion), last year.