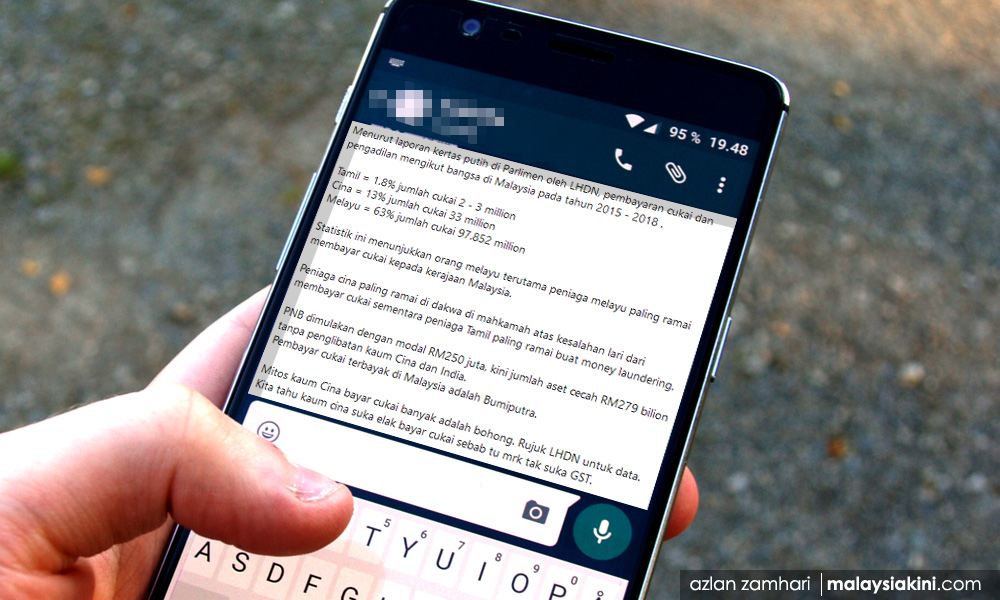 With issues of race and religion continuing to dominate the Malaysian political and social landscapes, it appears that even taxes are not spared.

The Inland Revenue Board (IRB) today denied a viral claim on social media regarding the data of taxpayers according to race.

“Based on the standard operating procedure (SOP), information pertaining to taxpayers and data concerning tax collection are not recorded based on race.

“IRB would like to stress that the data which is going viral on social media is not true nor is the information from IRB.

“Therefore, IRB wishes to advise the people not to spread inaccurate information to avoid misunderstanding,” it added in a statement.

The fraudulent data first appeared in the Facebook account “Shuaib Post” with the caption, "Siapa kata bangsa Cina & India banyak bayar cukai dekat kerajaan? (Who says the Chinese and Indians pay the most taxes to the government?)."

The posting claimed to quote a White Paper submitted by IRB to Parliament, purportedly detailing records of taxpayers from 2015 until 2018 based on race.

Based on this data, Malays were the largest contributors with 63 percent (RM97.852 million), followed by the Chinese 13 percent (RM33 million) dan Indians 1.8 percent (RM2 million-RM3 million).

“The myth that the Chinese pay the most taxes is a lie. Refer to IRB for the data. We know the Chinese prefer to avoid paying taxes because they do not like GST,” read the posting.

A check on IRB's website showed that records are not classified based on race.

tax
inland revenue board
race
white paper
Related Reports
Why tax me when I only received money from wealthy husband? - Nooryana Najwa
a year ago
IRB goes after Najib's daughter for RM10.3m unpaid taxes
a year ago
High Court sets Sept 6 to fix Najib’s bid to stay RM1.69b tax suit
a year ago
Gov't: Najib must pay RM1.69b in taxes despite reassessment appeal
a year ago
Najib says IRB taxed him RM1.69b for a donation, wants reassessment
a year ago