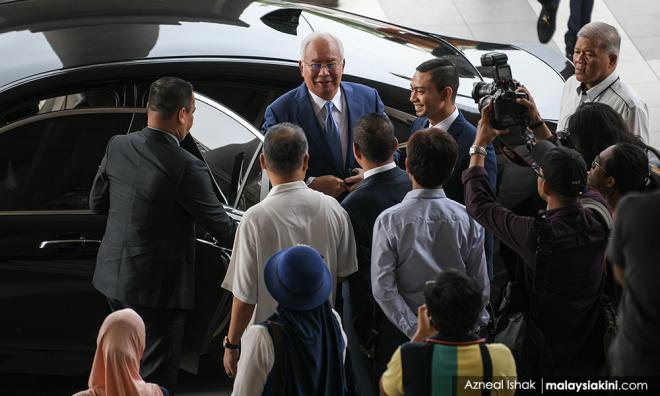 He said this included creating sham documents to pretend that the former premier received a donation from a member of the Saudi royalty when the sum originated from the state-owned firm.

"After the 1MDB scandal broke in early July 2015, the accused with his mirror image Jho Low took steps to cover his tracks.

"Sham documents were produced to pretend a donation from an Arab prince. Among these were letters and four cheques each for a sum of US$25 million purportedly written out by a person said to be the Arab donor.

"But these cheques were never meant to be encashed and were never encashed," said Sri Ram.

He added that two royal personalities were also involved in the misappropriation of 1MDB funds, particularly in the Good Star phase.

They were one "Prince Faisal" and another "Prince Turki."

"Prince Turki, the accused and Jho Low were so close that they holidayed together on a yacht in the south of France," Sri Ram told the court.

He said while the misappropriation of 1MDB funds involved several phases and characters, Najib ultimately played the pivotal role with the intent to enrich himself.

"The prosecution will also produce evidence to show that the accused took active steps to evade justice.

"He interfered with the course of the investigation of this case which came to be known as the 1MDB scandal. He took active steps to effect a cover-up of his criminal acts.

“The prosecution will rely on all this evidence to show that the accused had the requisite mens rea (intention of wrongdoing) when the offences with which he is charged were committed," he added.

Shafee: Prove Najib knew 'Arab donation' faked, then you can hang him