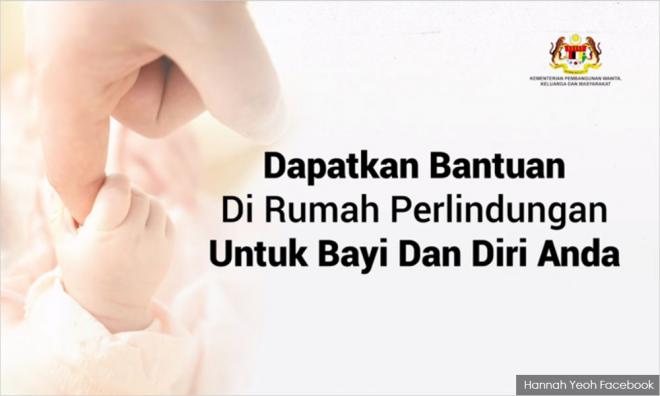 'You're not alone' - Ministry to run cinema ad for unmarried mothers

The Women, Family and Community Development Ministry will run an advertisement in cinemas to encourage mothers who have children out of wedlock to seek help.

“If an out-of-wedlock pregnancy happens, contact the Kasih 24-hour hotline at 15999.

“Be frank with family and trusted acquaintances. Go quickly to a clinic or government hospital. Contact a doctor and a counsellor through the Kafe Teen app.

“You are not alone. Get help at shelter homes for your baby and you. We are here to help,” the video says.

The clip will be aired on 282 screens in all 35 TGV cinemas across the country.

Women, Family and Community Development Minister Dr Wan Azizah Wan Ismail previously said there had been 1,010 reported cases of baby dumping from 2010 to May 2019.

She added that 64 percent of the babies (646 cases) died when they were found.

The top reasons for abandoning infants include out-of-wedlock pregnancies, a lack of information on what to do with the babies, and a lack of support for the new mothers.

Due to a lack of support, such pregnancies sometimes pushed mothers to abandon their babies.

Harlina, who also teaches at Universiti Kebangsaan Malaysia, said these increased risks were because teenage girls are not physically ready for pregnancies.

“This is why underage pregnant mothers must see the doctor frequently to get adequate care.

"Sadly, they will usually not come to the doctor if their parents do not know about their pregnancy,” she said.

Harlina further opined that marriage was one way to help underaged pregnant mothers or those who had children out of wedlock.

“The (pregnant mothers) won’t be left alone or exposed to the need to either abort, give away, sell or dump their babies,” she said.

According to the National Registration Department, 4,992 babies were born to underaged mothers in 2017.