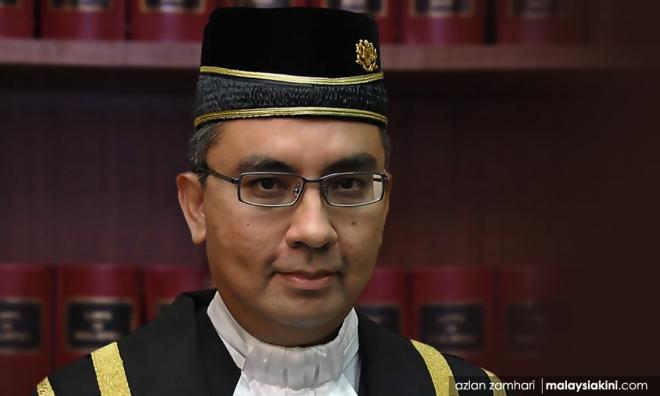 The Kuala Lumpur High Court ordered MACC to file an amended 'notice of motion' for its RM700,000 1MDB-related forfeiture suit against Pekan Umno, within seven days from today.

Otherwise, the legal action would be struck out.

Judge Mohd Nazlan Mohd Ghazali (photo, above) made the ruling this morning because the suit did not name Pekan Umno’s office-bearer as a respondent in the suit.

It is understood that Pekan Umno’s office-bearer is former party president and current Pekan MP Najib Abdul Razak, who is currently facing a slew of charges related to the 1MDB scandal.

Nazlan's ruling today came immediately after he threw out Pekan Umno’s application to strike out the suit on the grounds that the suit’s notice failed to comply with Section 9(c) of the Societies Act, which requires that legal action against a society must name its office-bearer as one of the respondents.

In his brief oral ruling to reject Pekan Umno's application, Nazlan said despite the MACC’s failure to name Pekan Umno's office-bearer in its Notice of Motion, the non-compliance does not justify nullifying the main action.

“The non-compliance here does not justify the striking out (application by Pekan Umno). The applicant (MACC) is given liberty to file an amended Notice of Motion that complies with Section 9(c) of the Societies Act within seven days from today.

“Otherwise, the main action (suit) will be struck out. The application (by Pekan Umno) to strike out (the suit) is dismissed.

“The prosecution has seven days to file the amended Notice of Motion. Otherwise, consequences would occur,” Nazlan said, adding that the next case management of the matter is on Sept 6.

Pekan Umno’s counsel M Reza then informed the court that he would seek instructions from his client on whether to appeal today’s verdict.

Meanwhile in the same proceedings, Reza objected to the prosecution’s application to gazette a notice for third parties to stake their claim to the RM700,000 being sought for forfeiture in the legal action.

This took place right after Nazlan issued his ruling, when Pillai had then made the application to gazette the third party notice within three months from now, in order “to save the court’s time”.

Pillai then gave an undertaking that the prosecution will file the suit’s amended Notice of Motion within seven days from today.

“The amended Notice of Motion must come in (filed at the Kuala Lumpur High Court) first before the third party notice could be considered. We also may want to appeal (against the ruling to reject the application to strike out the suit,” Reza countered.

The lawyer then suggested that the court fix a date for case management first, in order to update the court on the progress of the filing the amended Notice of Motion.

Nazlan agreed with Reza and fixed Sept 6 for case management of the matter.

“The amended Notice of Motion must be in by then (Sept 6),” Nazlan said.

On July 26, it was reported that Pekan Umno filed a preliminary objection against the MACC’s application to gazette third party notice in the 1MDB forfeiture suit against the divisional-level political organization.