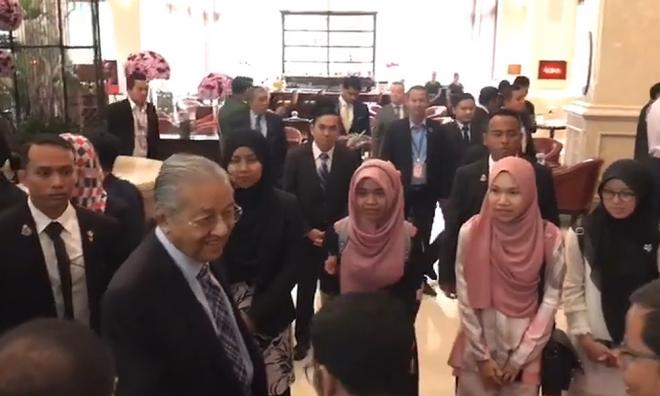 The special aircraft carrying Mahathir and his wife Dr Siti Hasmah Mohd Ali touched down at Phnom Penh International Airport at 10.35am.

Upon arrival, he was welcomed by Cambodian Senior Minister in charge of Special Missions Othsman Hassan.

Mahathir’s three-day official visit after 25 years was at the invitation of his Cambodian counterpart Hun Sen.

He is expected to attend the Balancing Relations with the Superpowers in the Context of Asean dialogue session with about 1,000 students and invited guests at Cambodia’s oldest public university, Royal University of Phnom Penh (RUPP).

Mahathir is also scheduled to meet with the Muslim community and attend a dinner with the Malaysian diaspora here before ending the first day of his visit today.

Tomorrow, he has a packed schedule, where he is expected to attend the wreath-laying ceremony at Cambodia’s Independence Monument before attending an official welcoming ceremony at the Peace Palace.

Later, Mahathir will hold bilateral talks with his Hun Sen (photo), and both leaders are expected to discuss issues relating to trade and investment, cooperation in agriculture, defence and halal industry development.

Both premiers will also witness the signing of the long-waited double taxation avoidance agreement (DTA) and memorandum of understanding on tourism cooperation. Both prime ministers are also expected to issue a joint statement at the end of the meeting.

On the same day, Mahathir will pay a courtesy call to acting head of state and president of Cambodia, Samdech Vibol Sena Pheakdey Say Chhum, and attend a dialogue with Malaysian businesspersons and investors, involving 28 Malaysian companies operating in Cambodia.

Mahathir and Siti Hasmah will also be attending an official dinner hosted by Hun Sen.

Meanwhile, Siti Hasmah has a separate programme which includes a visit the Cambodian Red Cross and lunch with the Women's Association of the Embassy of Malaysia in Cambodia.