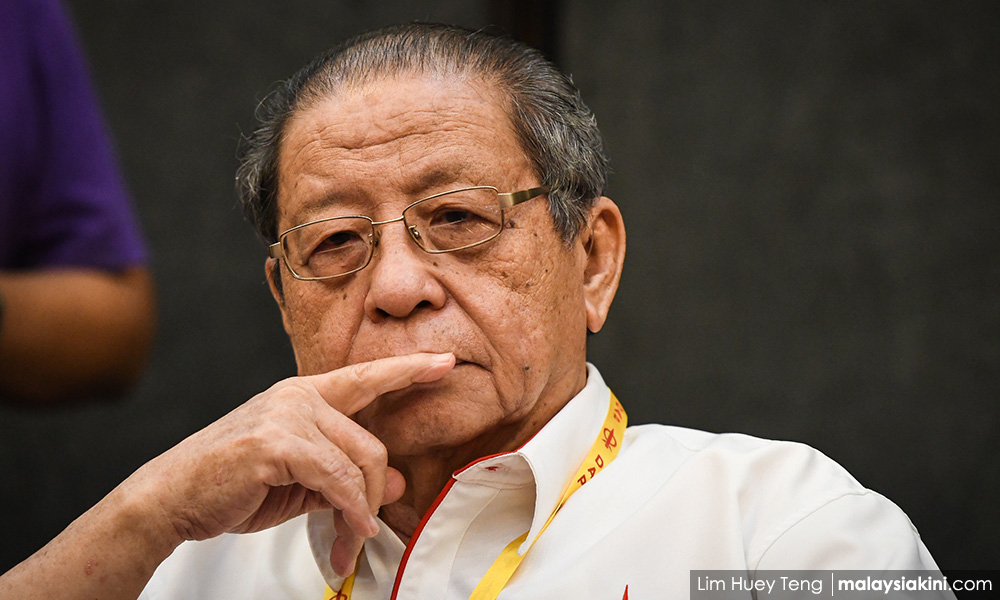 YOURSAY | ‘DAP and PKR should start standing up to Mahathir and his racist ministers.’

Kit Siang: Should I just forget about New M'sia and quit?

He asks for time. The realities have slowed the pace of reform. The opposition have shown tremendous resilience. Their support among Malays is strong. They exploit Malay anxieties and insecurities.

Muslim preacher Zakir Naik's preaches disrespect and intolerance and that seems to resonate with some Malays. How many? It’s difficult to say.

Even Harapan leaders are not prepared to articulate strongly their rejection of such preaching. Perhaps they dare not. Some may even think that such preaching is acceptable.

Emigration will continue. Many have begun to despair. We do not seem to learn.

Just look at the state of the world. Look at recent events in Sri Lanka. One would have thought that more than 20 years of warfare would have been lesson enough.

Look at Thailand and Pattani; at the Moro in Mindanao; at Myanmar, with the Rohingya, the Chin and the Kachin; look at Laos and the Hmong; Indonesia and Papua and so on.

And then, go to Africa and the Middle East; India and Kashmir; China and Tibet and the Uighur. The areas of strife are endless.

What are non-Malay’s expectations? Honest government. Inclusive government. Needs-based assistance for the poor. Good education. Justice, fairness, and the rule of law.

It is all within the framework of the Constitution. Why is that so hard?

Legit: Lim, Harapan is the government today not because of Prime Minister Dr Mahathir Mohamad or Bersatu. It is because of the hard work put by DAP and PKR.

But you, DAP, and many in PKR, have given in too much to the old man seemingly for selfish reasons. You should start standing up to the old man and his racist ministers and members.

Fighters do not quit easily. If you stick around, then do it with a purpose, which is what you had fought for before the 14th general election. Don’t ever give in to the racists and religious bigots so easily.

What is the worst that can happen if you stand and fight the old man and the racists? Harapan will be split and Bersatu, Umno, and PAS may come in and form the government.

What if you quit now? The same thing will happen, right? So why not fight, and if the split happens, so be it. Who knows, you may succeed with the help of PKR, Amanah, and others.

The non-Malays have given in too much to the extremist Malays and we cannot give in anymore. There are millions of fair-minded and reasonable Malays out there and they will support a just government that involves all races. So, don’t quit without a fight.

Caripasal: DAP’s biggest mistake is to appoint a racist to lead Pakatan Harapan – a racist who only cares about his own race and survival of his own party to the extent of destroying other parties in his coalition, and colluding with the common enemy, PAS and Umno.

Just ask any DAP supporter. They will tell you to get rid of the racist, failing which, “New Malaysia” is only a dream.

Chuen Tick: Why are you posing these questions, Lim?

Please remember you are part of the ruling coalition. It is incumbent of Harapan leaders to turn the dire scenarios you brought up around.

Don't blame the rakyat for turning our back on Harapan. You folks in Harapan have been breaking 14th general election promises like nobody's business. But it is the rakyat's business, and we are taking you folks to task!

Roger 5201: Lim, it’s good time to retire with your legacy intact instead of compromising your principles with these spineless politicians. Mahathir can destroy what is left of his legacy as he so wished.

The International Convention on the Elimination of All Forms of Racial Discrimination (Icerd) is dead. Malaysia's politics is increasingly a numbers game involving ever more potent race and religion.

Thank you for your personal sacrifices in taking “Malaysia Baru” to new heights never before thought possible, thanks in part to the “Malu Apa Bossku” kleptocrats.

History will accord a special place to leaders of principles, the likes of the late DAP chairperson Karpal Singh and yourself for your past sacrifices, contributions and foresight, and unwavering commitment to the principles of justice and fair play in Malaysia.

Anonymous_1371690872: Well said, Lim. I believe in you. Don’t give up the fight. The country needs leaders like you. Please convince your fellow Harapan leaders to do the same, and fast.

MS: Did you ever have a practical plan to get to your “New Malaysia”? Did you ever publish its details and a roadmap with key actions and milestones? Did you and your Harapan bedfellows ever spell out your reform agenda? No, no, and no.

Instead you allowed the Bersatu Bigots Brigade led by Mahathir to run amok.

Your years in the opposition has not given you the skills to govern, to shape policies, to lead the masses, or even to stand up to the nonsense represented by Mahathir and Bersatu.

Since you are not making a difference to anyone or anything, since the extremists have been allowed to spread and suffocate all those who voted you and your lot, you should retire and watch the country implode under Mahathir.

MW: Dear Lim, you write to Malaysiakini almost daily, so I have to assume you read the comments too.

You seem to have become an apologist to your once opponent and your latest post here seems to be again a sympathy-gathering exercise, picking on a bunch of issues that you obviously know are not the real issues causing dissatisfaction among voters.

After 16 months, there's no coherent plan whatsoever to address any issue, whether it's the economy or education. If a person is hired to lead a company and to clean up his predecessor's mess, in the first quarter he is allowed the time to find out the true situation and to come out with a plan.

However, if he still doesn’t even have a plan by second quarter, he is going to be sacked.

Sixteen months later, where's the detailed master plan? I'm not asking for results, just a coherent plan forward. Is even that too much to ask?

yoursay
lim kit siang
race & religion
pakatan harapan
dap
Related Reports
Mahathir insists Harapan not straying from the middle
a year ago
Amid bleak backdrop, Kit Siang meets Dr M and Anwar on nation-building
a year ago
Harapan may win GE15, but what are we winning?
a year ago
Dr M: I'm not alone and Harapan not falling apart
a year ago