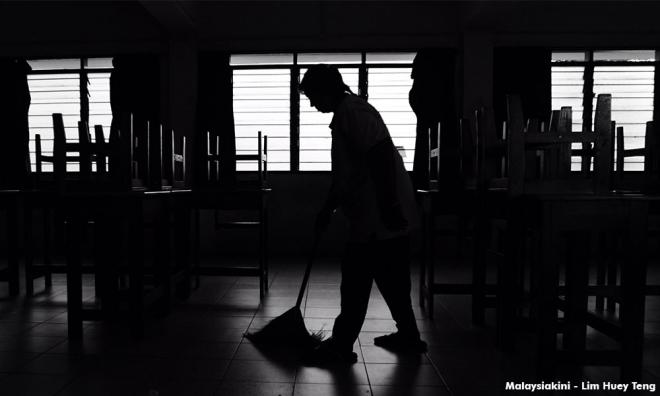 YOURSAY | ‘This injustice, if not rectified, will have dire consequences in the future.’

Dizzer: Thanks, Parti Sosialis Malaysia deputy chairperson S Arutchelvan. That was very enlightening. PSM is the only political party in Malaysia that doesn't make me nauseous.

I'm glad you distinguished between government-linked companies and the private sector. It does indeed seem obscene that publicly owned companies should pay CEOs the kind of money one usually associates with US hedge fund managers.

It's still obscene that private companies pay their bosses astronomical salaries but at least there's the justification of the free market in mitigation.

LD Man: This is sheer abuse of workers. Starting pay is RM1,100, and some 30 years later, it still RM1,100. Is this fair? No excuses can justify such injustice.

Don't the employers have any compassion? The cost of living goes up every year; they don't go down, and don't employers know that?

Are they living in castles in the clouds, that they are far removed from the reality on the ground? Or are they plain dumb? Or is all about making money, and to hell with how the workers survive?

This is absolutely ridiculous!

How much are the contractors charging the government for the cleaning of hospitals? It is definitely not the same rate each year. They would have got their rates increased every year or two.

How inhumane can you get?

Fellow Malaysian: Arutchelvan, you are dead right. It is daylight robbery indeed.

And yet, we have a parroting minister like Economic Affairs Minister Azmin Ali who virtually denied that poverty ever existed in this god-forsaken country.

Azmin expects these cleaners earning RM1,100 to somehow, miraculously, raise a family of five. He has forgotten that he was voted in to fight for the plight of these poor souls who voted for him.

Anonymous_1371555221: How many people are eligible for Bantuan Sara Hidup?

There are a lot who were not being considered due to logistics, political affiliation, and being unreachable. Azmin never knew about these. Why?

Kangkung: Sadly, cleaners and all labourers get the short end of the stick.

But even an average wage earner will struggle in this country and cannot dream of living a comfortable life after retirement.

After paying off the monthly loans for the house, car, and monthly household expenses, there's barely money left for savings, let alone entertainment.

The disparity between the rich and the poor is getting bigger by the day. This injustice, if not rectified, will have dire consequences in the future.

Ex-Wfw: Well, we always compare the turnovers but not the bottom lines. This is especially so with heads of GLCs (government-linked companies) with their tenure almost guaranteed until dismissal.

Bonuses should be tied to the company’s performance, and not because the private sector is paying large salary packages.

I cannot understand as to why the hospitals are not taken to court. There was this case where the drivers were asked to sign as contractors thus depriving them of their EPF (Employees Provident Fund) contributions.

The drivers took the company to the court and it was decided that such action was illegal; hence the company was made to pay the contributions.

Ramesh Nair: A direct comparison made just on salary is not fair for both parties.

Responsibilities, experience, exposure, and several other factors need to be considered even before equating the rates.

The figures Arutchelvan highlighted is just playing with mathematics. What are you trying to achieve?

Rather than salaries that is the end result - has anyone thought of training or retraining the low-income groups to become self-sufficient, resilient, and with skills to earn more?

So, what did the retreat with the cleaners achieve?

Cepol: While it is true the CEOs earn that much, they also pay higher taxes to pay for all the services government do - which includes the government hospital.

If the yearly bonus and salary is RM30 million, almost RM9 million goes to taxes.

That is direct individual tax, not including the tax on his/her company. Without these taxes, who will pay for all salaries including those that you compare?

Clever Voter: One of the failures of capitalism is its inability to trickle down the gains to the bottom. Unfortunately, labour continues to be treated as a factor of production, and the argument that any increase in wages will impact on profits.

The income inequality between rich and poor has been rising for decades, in almost all the markets. Unless businesses are prepared to redistribute their rewards for the top 10 percent to the rest, we will continue to see gap widening.

It's not going to happen, as now firms are cleverly outsourcing their low-end services. Unfortunately, employers do not see addressing such concerns as their social responsibility.

Anonymous 0123456789: Are those CEOs happy knowing these facts and figures?

Don’t they feel guilty when they come across these cleaners mopping the floor on their way to their posh offices?