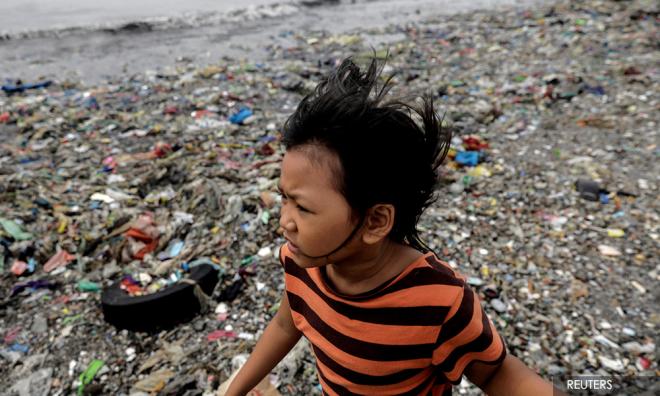 Slave to sachets - How poverty worsens plastics crisis in the Philippines

Armed with gloves, rubber boots and a rake, "Mangrove Warrior" Willer Gualva, 68, comes to Freedom Island in the Philippines almost every day to stop it being engulfed by trash.

No one lives on the island, yet each morning its shores are covered in garbage, much of it single-use sachets of shampoo, toothpaste, detergent and coffee that are carried out to sea by the rivers of overcrowded Manila.

"We collect mostly plastics here and the number one type is sachets," said Gualva, one of 17 people employed by the environment agency to help preserve the island and its forest. The agency, the Department of Environment and Natural Resources (DENR), calls them "Mangrove Warriors", and pays them slightly above US$8 per day.

Five days of coastal clean-up on the Manila Bay island last month yielded a total of 16,000kg of trash, DENR data showed, the bulk of it plastics, including the sachets made of aluminium and blends of plastics.

These packets give some of the poorest people in Asia access to everyday household essentials. For the multinationals that manufacture them, it's a way to increase sales by targeting customers who cannot afford bigger quantities.

Such sachets are sold in most developing countries but the number consumed in the Philippines is staggering - 163 million pieces a day, according to a recent study by environment group The Global Alliance for Incinerator Alternatives (GAIA).

In Manila's slum areas which are inaccessible to garbage trucks, sachets and other waste are thrown in estuaries or dumped on the street and end up clogging drains and waterways.

"Money is hard to come by, so I only buy sachets," said Lisa Jorillo, 42, a mother of four who lives in a slum in Manila's Tondo area, behind a beach blanketed by trash.

"It's likely the garbage will still be there when my son grows up," Jorillo said, referring to her four-year-old.

The Philippines' law on solid waste is poorly enforced and the country doesn't regulate packaging manufacturing. The country is ranked third in the world for failing to deal with its plastics, according to a 2015 study by the University of Georgia, which said 81 percent of plastics waste in the country was mismanaged.

Sachets for the poor

About 14 million people live in Metro Manila, one of Asia's teeming megacities. Overall, the Philippines has a population of 107 million people, and one-fifth of them live below the national poverty line, described by the statistics agency as a monthly consumption of less than US$241 per person.

Jorillo's family earns about 2,500 pesos (US$48) a week from the construction work that her husband does, and she and her family buy about 80 sachets of coffee, toothpaste and shampoo each month.

In sea-facing Manila, much of the trash ends up in the sea. The Philippines, Indonesia, Thailand, Vietnam and China account for 60 percent of the world's marine plastic, or eight million tonnes annually, according to the Ocean Conservancy non-profit group.

Environmentalists say the main culprits aren't governments or consumers, but the multinationals that churn out plastic packaging.

"They have money to do research that will remove the problematic packaging," said Sonia Mendoza, head of the Mother Earth Foundation, which promotes waste reduction. She said refilling stations could be one way to reduce the use of single-use sachets.

The environmental group GAIA studied non-recyclable waste collected in Philippine clean-ups and found that 60 percent of it came from just 10 companies, led by Nestle, Unilever and Procter & Gamble.

Nestle declined to disclose the volume of sachets it produced or sold in the Philippines.

Nestle said it was committed to finding ways to keep plastics out of oceans through plastic collection and recycling programmes, but added that sachets prevented leakage of micro-nutrients essential to addressing malnutrition, especially among children.

Unilever did not say how many sachets it produces in the Philippines but said its global plastic packaging production is 610,000 tonnes annually.

The figure, Unilever said, includes "flexible packaging formats" used by one million micro-businesses in the Philippines. Nestle and Unilever's target is for 100 percent of their packaging to be recyclable or reusable by 2025 worldwide.

Unilever said it has a community-based sachet recovery programme in the Philippines where collected sachets are converted to school chairs and cement pavers. It also pilot ran shampoo and conditioner refilling stations this year, which it plans to scale up.

The Philippines government does not have a clear strategy to tackle its plastics crisis.

In an e-mail response to Reuters, the DENR said it was in discussions with all manufacturers to identify ways to manage waste. It provided no details.

Elsewhere in the region, Indonesia has a law requiring producers to manage non-biodegradable packaging and the tourist island of Bali bans single-use plastics.

Thailand is between now and 2025 introducing bans on seven types of plastics most commonly found in the ocean, like bottle cap seals, disposable bags, cups and straws.

Vietnam hopes to raise taxes on plastic bags and its prime minister has urged shops to stop using non-recyclable plastics in cities by 2021, and countrywide by 2025.

The Philippines industry group PARMS, which includes Unilever, P&G and Nestle among its members, is building a 25 million pesos (US$475,000) facility that aims to turn sachets into plastic blocks and eco-bricks.

But Von Hernandez, global coordinator for the Break Free From Plastic movement, calls that "greenwashing" - or only trying to appear more environmentally friendly.

"They are not really changing the true nature of their business," Hernandez said of the multinationals. "The plastics industry is slated to grow exponentially, especially by 2030. The bulk of that is going to packaging and you can bet this is going to end up in sachets."

Crispian Lao, president of PARMS, said every effort, even those which "may be perceived as small and insignificant", helps address the problem.

Lao said sachets were a necessity for lower-income groups but added the industry is exploring other delivery formats and packaging alternatives.

Cynthia Villar, a senator, says she is pushing for a radical re-write of an existing waste law to force firms to collect, recycle and dispose of all single-use plastics they produce.

"They always say they're willing to do it. But it's a different story altogether whether they'll do it, so we have to embody it in law so they'll all follow," Villar said.