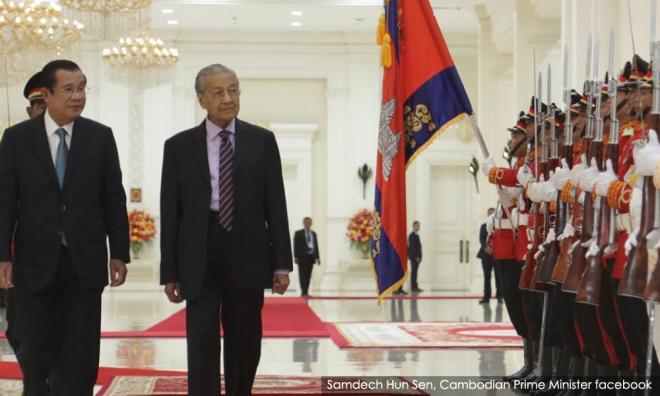 Malaysia and Cambodia are committed to facilitating the necessary actions to increase bilateral trade and investment between the two countries.

In a joint statement issued by Wisma Putra after a bilateral meeting between Prime Minister Dr Mahathir Mohamad and his counterpart Hun Sen in Cambodia today, the leaders expressed satisfaction at the continued progress made by the public and private sectors in boosting trade and investment.

According to the statement, Mahathir and Hun Sen encouraged both sides to continue exploring innovative ways and measures to strengthen cooperation in trade and investment.

It said the Cambodian government welcomed Malaysian businessmen to explore opportunities in Cambodia, especially in the areas of agriculture, education, tourism and infrastructure, while the Malaysian government encouraged the private sector to expand trade through collaboration in Cambodia’s long-term development projects.

"The Malaysian government is also committed to accelerating trade via cross-border initiatives within Asean and the digital platforms such as e-commerce," it said.

Mahathir is on a three-day official visit to Cambodia beginning yesterday.

The leaders also encouraged cooperation between the two countries in developing the halal industry in Cambodia.

The government of Cambodia thanked the Malaysian government (Islamic Development Department) for its continued technical assistance in facilitating the process and procedure in getting the halal certificate, according to the statement.

Meanwhile, Malaysia and Cambodia acknowledged that the area of defence cooperation needed to be strengthened through more training and information sharing.

"The leaders acknowledged the growing threats of terrorism and radicalism globally, hence better coordination in terms of security needs to be established between the two countries, while they also underscored the importance of security cooperation, especially in maintaining peace and stability in light of the security challenges and threats in the region,” the statement said.

Wisma Putra said both leaders encouraged the relevant agencies to continue strengthening the framework agreed upon in terms of employment and to further promote close cooperation and coordination to promote the rights and address the welfare of Cambodian migrant workers in Malaysia.

Both leaders also exchanged views on regional and global issues of common interest and concern, including cooperation amongst Asean member states, issues related to the South China Sea, developments in Rakhine State, counter-terrorism and other current global issues.