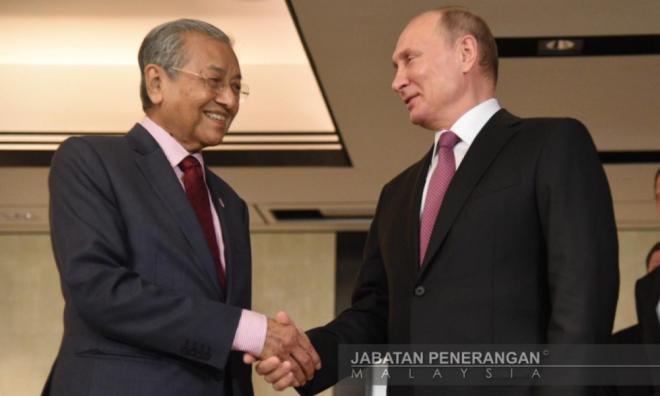 Prime Minister Dr Mahathir Mohamad is scheduled to arrive in Russia for a three-day visit tomorrow at the invitation of Russian President Vladimir Putin.

Malaysian ambassador to Russia Mat Dris Yaacob said the visit would enhance the diplomatic ties and spur bilateral trade between the two countries.

Speaking to the Malaysian media here today, Mat Dris said Mahathir and his delegation would take part in the Eastern Economic Forum (EEF) for the first time.

The prime minister will join other nations’ leaders at the forum that provides a platform for discussing issues aimed at expanding international cooperation in the Asia-Pacific region.

On Thursday, he is expected to speak at the forum’s plenary session, the key event of the 5th EEF, held at the Far Eastern Federal University campus here.

According to him, shipbuilding, tourism, education, construction, aviation and aerospace are some of economic areas in Vladivostok that could be explored further by Malaysian companies.

Meanwhile, forum organiser Roscongress Foundation quoted adviser to the Russian President, Anton Kobyakov, as saying that Russia was keen to develop cooperation with Malaysia in trade, military-technical and humanitarian spheres.

He suggested that Malaysia cooperate with the Eurasian Economic Community (EEC) to build more intensive trade relations between the two countries.

“The EEC is a promising platform for the formation of common international markets,” Kobyakov said.

He pointed out that Malaysia had a number of major investment projects in Russia.