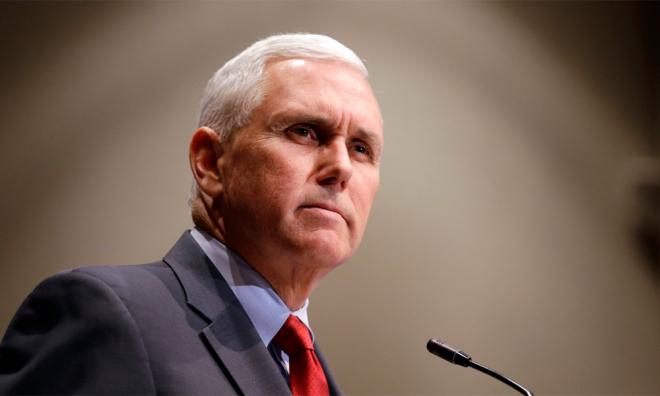 US Vice President Mike Pence (photo, above) used a visit to Ireland on Tuesday to urge the European Union to negotiate “in good faith” with British Prime Minister Boris Johnson and reach a Brexit deal that respects British sovereignty.

The outcome of Brexit remains uncertain three years on from the vote to leave the bloc, with disagreement on how to keep EU member Ireland’s border with Northern Ireland open and not jeopardize two decades of peace in the British-run region.

“The United States supports the United Kingdom’s decision to leave the European Union but we also recognize the unique challenges on your border and I can assure you we will continue to encourage the United Kingdom and Ireland to ensure any Brexit deal respects the Good Friday Agreement,” Pence told a joint news conference with Varadkar.

“But as the deadline for Brexit approaches, we urge Ireland and the European Union as well to negotiate in good faith with Prime Minister Johnson and work to reach an agreement that respects the United Kingdom’s sovereignty and minimizes disruption to commerce.”

Echoing a view of some others around the EU, Irish Foreign Minister Simon Coveney said last week that Britain had offered “nothing credible” regarding alternatives to the Irish backstop arrangement that aims to solve the border conundrum.

Pence added that Washington would hope to play whatever helpful role it can in the Brexit process, while reiterating that it was also anxious to negotiate a free trade agreement with the EU as well as post-Brexit Britain.

Varadkar asked Pence to take a message back to the United States that Ireland had to stand behind the divorce agreement the EU struck with Britain but that Johnson now wants to change.

“I know that you understand the impact a hard border will have on us on this island... the risk that the Good Friday Agreement and peace will be undermined. That is why we must stand our ground on the (Brexit) Withdrawal Agreement,” he said.

“Mr Vice President, all I ask is that you bring that message back to Washington with you. This isn’t a problem of our making, it is one that we want to solve through an orderly Brexit and an agreement that there will be no hard border on this island.”

The United States played a big role in negotiating the Good Friday Agreement that largely ended three decades of sectarian bloodshed. Senior lawmakers including Senate Democratic leader Chuck Schumer and House of Representatives Speaker Nancy Pelosi have said they would oppose any US post-Brexit trade deal with Britain that undermines the peace deal.