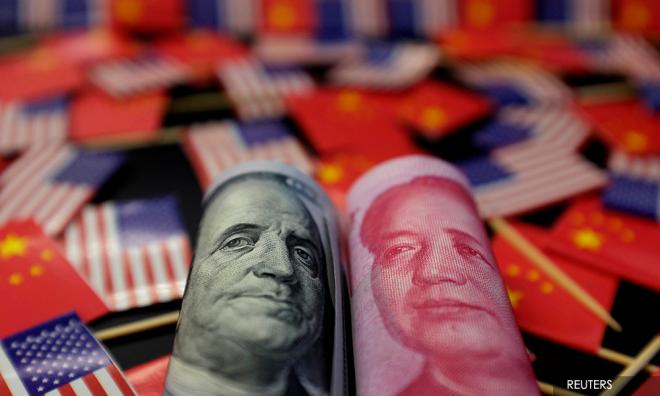 US, China more divided than ever as new trade talks loom

Senior US and Chinese officials have pledged to meet in October to settle their ongoing trade war but a lasting peace seems more elusive than ever.

Since trade negotiations between the world’s largest economies broke down in May, both countries have added tariffs on billions of dollars of the others’ goods, broken good faith promises and traded public insults.

Washington accused Beijing of reneging on commitments to change its laws to enact economic reforms, while Beijing called US President Donald Trump’s tariff’s “barbaric.” Leaders from both countries are now vowing a long fight, despite slowing domestic economies.

Here is the state of play:

Deputies from the US and China trade teams will talk in mid-September to prepare for negotiations between US Trade Representative Robert Lighthizer, Treasury Secretary Steven Mnuchin, and China’s Vice-Premier Liu He in early October. Both sides agreed to take actions to create favourable conditions but gave no details.

Neither side has signalled it would shift from positions that led to the impasse in May, when Beijing revised a draft of the trade deal, removing references to changes in Chinese law.

US officials have previously said that the resumption of talks would depend on China returning to the original May deal text, but there has been no sign that China has agreed to take that step.

Beijing has cited three main sticking points in the trade negotiations. They are the removal of tariffs imposed in the trade war, reduction of the scale of US goods purchases that China will make to help reduce the trade imbalance between the two, and the need for a “balanced” text for any trade deal.

When Chinese President Xi Jinping and Trump met in Osaka, Japan in June, Beijing committed to buying 20 million tonnes of US soybeans but has only purchased half that amount since. Washington pledged to ease restrictions on blacklisted Huawei Technologies Co Ltd but has not issued waivers.

Beijing is smarting from Trump’s decision to blacklist Huawei, the world’s largest telecommunications equipment maker, which effectively banned US firms from doing business with the company. It has prompted many non-US-based companies to cut their own ties to the firm.

China wants the United States to lift those restrictions, trade deal or no, but Washington is lobbying other countries to reduce dealings with Huawei and has threatened to blacklist other Chinese firms.

Before the talks broke down in May, US officials had said the two sides made progress on intellectual property protection and that China made proposals on a range of issues that went further than Beijing had gone before.

China for the first time discussed forced technology transfer as a widespread problem, US officials said then. US companies complain they are pressured to hand over their competitive secrets as a condition for doing business in China.

China, they said, offered to bring subsidies in line with World Trade Organization guidelines but had not detailed how it would do that.

For its part, the United States weakened demands China end industrial subsidies, which would require a change in China’s state-driven economic model.

But after the deal fell apart, Lighthizer told a congressional hearing that China had also backtracked on commitments on digital trade issues, including US access to cloud computing services in China.

US officials said China offered to make purchases of over US$1 trillion worth of goods over the next six years, including agricultural and energy products as well as industrial goods. China has said, however, that there is still disagreement between the two sides on the actual purchases.

Tariffs as a negotiating tool

One of the key sticking points before talks broke down in May was whether the Trump administration would remove 25 percent tariffs it had imposed on US$250 billion worth of imported goods from China. The US wanted to keep some tariffs in place to ensure that China met the terms of the deal, but China demanded all tariffs be lifted immediately.

Things have escalated since. Those US tariffs are now due to rise to 30 percent from Oct 1, the 70th anniversary of the current Chinese state. Another US$300 billion of Chinese imports face 15 percent US tariffs, some of which began Sept 1, with the rest to start Dec 15.

Washington could agree, as a sign of goodwill toward Beijing, to delay the 5 percent tariff increase, and possibly the 15 percent tariffs due to begin in December, analysts say.

Trump has repeatedly insisted that China is paying the cost of US tariffs, a claim rejected by US retailers and manufacturers, although he has recently begun to concede that the trade war could also harm the US economy in the short-term.

“China has been ripping this country off for 25 years, for longer than that and it’s about time whether it’s good for our country or bad for our country short term. Long term it’s imperative that somebody does this,” he said in August.

China’s Liu, also the chief trade negotiator, on Thursday also spoke about downward pressure on the Chinese economy but said Beijing had sufficient policy tools to deal with any difficulties.

Many of China’s analysts believe Beijing will roll out more measures to boost the economy, minimizing the impact of the trade war.

China has said it would draft its own list of foreign companies that it deems had harmed Chinese companies. That could serve as the basis for retaliation against US companies for action against Huawei.

China has also indicated it may strike back through limiting rare earth supplies to the United States. Rare earths are minerals important to manufacturers of high-tech consumer goods and China is the dominant supplier.

It could also revoke orders for aeroplanes built by Boeing Co, the no 1 US exporter.

Trump is calling for US companies like General Motors Co to pull manufacturing facilities out of China.

China is determined to upgrade its industrial base in 10 strategic sectors by 2025, including aerospace, robotics, semiconductors, artificial intelligence and new-energy vehicles.

One of the biggest US complaints is that China has used coercion and outright theft to systematically obtain American intellectual property and trade secrets and advance its standing in many high-technology industries.

China’s subsidies to state enterprises, including at the provincial and local government levels, have led to a build-up in Chinese industries like steel that has depressed global prices and hurt producers in the United States and elsewhere.

US officials argue that makes it hard for US companies to compete on a market-driven basis.

They say they do not have a problem with China moving up the technology ladder, but they do not want it to happen with stolen or unfairly obtained American know-how or in a market in which Chinese firms have an unfair advantage.

Chinese officials generally view the US actions as a broad effort to thwart the Asian country’s rise in the global economy. They previously denied China required or coerced technology transfers, saying that any such actions are commercial transactions between American and Chinese firms.

The Trump administration has aggressively stepped up prosecutions of intellectual property cases and scaled back visas for Chinese students and researchers. US lawmakers are writing bills that further limit visas, banning students with ties to the Chinese military.

Chinese authorities reject such accusations. In June Beijing warned students and academics about risks in the United States, pointing to limits on the duration of visas and visa refusals. It also warned companies operating in the United States they could face harassment from US law enforcement, gun violence, robberies, and thefts.