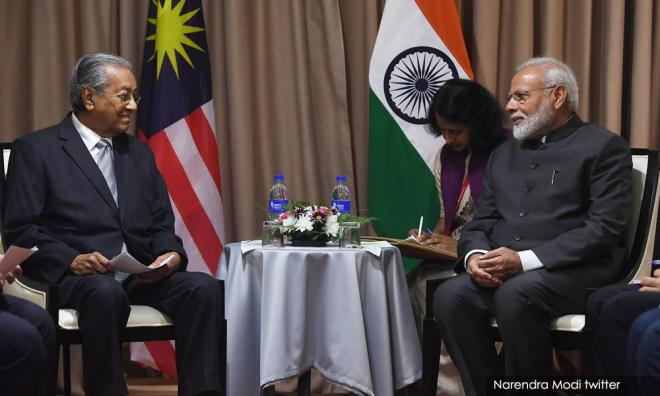 “Zakir Naik was mentioned by prime minister Modi in passing and he (Modi) mentioned the matter was being discussed by officers of both countries.

"That was how he (Modi) presented it. Then, Dr Mahathir did not respond as most of the time was used to discuss on Kashmir,” he was quoted as saying by Bernama.

Saifuddin said there was no discussion between his ministry and the Foreign Ministry of India now and it was only a diplomatic note which was sent by India to seek Zakir's extradition.

On the whole, Saifuddin said the issue concerning Zakir's status would not affect relations between Malaysia and India.

Yesterday, Indian newspapers reported that Modi raised the issue during his hour-long meeting with Mahathir in Vladivostok, Russia, ahead of the three-day Eastern Economic Summit.

“Both the parties have decided that our officials will stay in contact regarding the matter and it is an important issue for us,” said Indian Foreign Secretary Vijay Gokhale.

Zakir, who is a Malaysian permanent resident, is wanted by the Indian authorities on charges of inciting terrorism and money laundering, which the preacher claims are fabricated.

Meanwhile, Saifuddin said the main topic during the meeting between Mahathir and Modi was the issue of Jammu and Kashmir.

“Prime minister Modi took time to clarify the position of Jammu and Kashmir while Dr Mahathir explained Malaysia's stand that all parties should meet and adhere to United Nations resolutions,” he added.

Saifuddin said Mahathir did not pledge support for or against any parties but hoped the conflict would be settled and not escalate to war.

Apart from complying with UN resolutions, Mahathir said the best way to resolve the issue in Kashmir is through negotiations as well as bringing a third party, if necessary, or to bring the case to the international court.

On the significance of the issue on Malaysia, Saifuddin considered Malaysia as an Islamic country with its own position among Islamic countries which can explain the actual situation if the matter is brought up at any international platform.

Media reports stated that the tension between Pakistan and India flared up last month following India’s move to cancel the special status of both Jammu and Kashmir, which enabled the people to formulate their own laws and prevent foreigners from residing in the territories.

On Mahathir's meeting with Russian President Vladimir Putin, he said discussions covered cooperation in aerospace engineering research, sales of palm oil to Russia and offer of military assets to Malaysia.

“Russia offers their latest fighter jets and was willing to take back our old jets but it was not discussed in detail as the government has not made a decision whether to buy or not,” Saifuddin said.