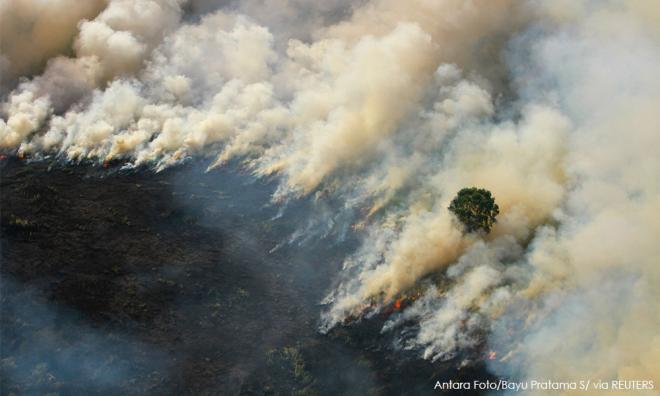 Malaysia complains of smog from Indonesia as forest fires flare

Malaysia will urge Indonesia to take immediate action to fight haze as Jakarta has detected a spike in worsening forest fires across the archipelago.

During the dry season, Indonesian farmers use fire to clear land, often for palm and pulp plantations, but the flames rage out of control and cause a choking haze that spreads to neighbouring countries like Malaysia and Singapore.

A mild El Nino weather pattern this year has aggravated the impact of forest fires, with the number of hot spots rising to the highest since devastating fires in 2015.

In a statement, Malaysia's Ministry of Science, Technology and Innovation said it would send a diplomatic note to Indonesia, so that immediate action will be taken to put out the forest fires and prevent repeated burning.

A spokesman for Indonesia's foreign ministry, Teuku Faizasyah, declined to comment on the issue, but said he would check if Jakarta had received the note.

Indonesia faces global pressure to put an end to slash-and-burn clearance of land, especially as fires have also burned swathes of the Amazon and parts of Africa.

By Friday morning, Indonesian authorities had detected 6,312 hot spots, which often signal a fire, dotting the western and central areas of its part of Borneo island.

The number had risen from Thursday as many had previously been obscured by smoke, he added.

Indonesia has deployed more than 9,000 military, police and disaster agency personnel to douse the fires, having declared an emergency in six provinces on the islands of Sumatra and Borneo.

Southeast Asia has suffered for years from annual bouts of smog caused by slash-and-burn practices in Indonesia’s islands of Sumatra and Kalimantan.

Transboundary haze was detected on Thursday spreading from the Indonesian province of West Kalimantan on Borneo to the island's Malaysian side, Indonesia's climate agency said.

Haze reduced visibility to a distance of 10 to 20 metres in the town of Sampit in Indonesia's province of Central Kalimantan on Borneo, the media reported.

The town's air quality index hit 356 by midday on Friday, a hazardous level, according to the non-profit World Air Quality Index.

"I implore the whole community not to burn land. The impact has been very disturbing to the wider community, on health, education and economic activities," said local government head Supian Hadi, according to state news agency Antara.

An aerial photograph from the news agency showed fires had reignited in the national parks of Berbak and Sembilang in Jambi on Sumatra, despite having been put out several days earlier.

Drought has hit large parts of Indonesia as El Nino disrupts the dry season, which is expected to last until October, the climate agency said.