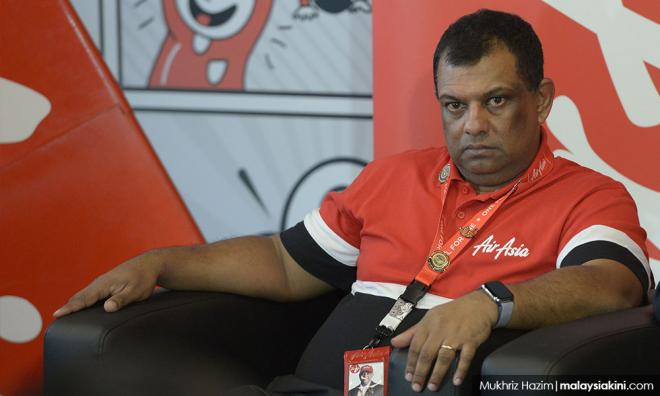 AirAsia Bhd group CEO Tony Fernandes has claimed that the Malaysian Aviation Commission (Mavcom) has failed the country’s aviation sector, backing it with seven reasons, among others introducing bureaucratic policies.

“Some of the requirements imposed by Mavcom include airlines notifying other local airlines on new route applications which is a time-consuming and unnecessary process; a three times a week limit on submissions of route applications; and the introduction of a six-month 'cooling-off' period for re-submission of rejected applications,” he said.

In the latest round of attack on the commission, Fernandes claimed that Mavcom, on many occasions, rejected several route applications, even though bilateral traffic rights are available with other countries.

“In other words, Mavcom is rejecting applications on bilaterally-unrestricted routes. This is a blatantly unfair practice,” he posted on LinkedIn.

“In the past, the Transport Ministry granted approvals as long as Air Service Agreements are in place.

"And it is definitely not Mavcom's function to determine whether airlines will ultimately utilise the approved traffic rights,” he said in his post.

Mavcom was formally established on March 1, 2016, under the Malaysian Aviation Commission Act 2015 to regulate economic and commercial matters related to civil aviation in Malaysia.

“It is supposed to be an independent entity to regulate economic and commercial matters related to civil aviation in Malaysia. However, they have failed to discharge their duties effectively and fairly,” he said.

“An RM1 ‘Regulatory Service Charge’ is imposed on all passengers flying out of airports in Malaysia, in addition to the Passenger Service Charges (PSC) and Departure Levy.

“This is an unnecessary burden for passengers who collectively are paying close to RM30 million a year to cover the operating costs of a regulator who does not represent their best interests,” he said.

He said in 2018, Mavcom pledged that it would introduce an SLA between airport operators and airlines “to ensure the continuous growth and sustainability of the aviation industry."

More than a year later, no SLA is in sight, he added.

Without the SLA, airports in Malaysia have been utilising their monopolistic position to earn excessive profits, while exercising power in the form of ever-increasing charges, Fernandes said.

“Without an SLA, airlines are left with no recourse to address the numerous operational issues such as those at KLIA2. These include, frequent unplanned runway closures, uneven aprons and taxiways, and a poor airport design that requires long walks to gates and subsequent delays for passengers trying to get to their flights,” he said.

He also claimed that Mavcom lacks understanding and appreciation of the low-cost model.

“In October 2019, Mavcom will announce the new PSC rates (effective January 2020) which were developed in accordance with the Regulated Asset Base (RAB) Framework.

“In 2017, Mavcom removed the distinction of KLIA2 which has a lower PSC when they amended the aviation services charges.

“And now there seems to be an inclination to group KLIA and KLIA2 together, which would re-equalise international PSC rates for both airports.

"While the tariff options and rates have yet to be finalised, the new framework could negate the cabinet’s recent decision to reduce the international PSC rates (beyond Asean) for all airports in Malaysia, except KLIA,” he said.

Fernandes said the low-cost carrier (LCC) segment has grown by an average of 16 percent, close to triple the growth of full-service carriers and now accounting for 50 percent share of air travel in Asean.

He said, however, among Mavcom’s senior management there is resistance to this shift in customer preference for air travel, creating what is a conflict of interest when it comes to an understanding of low-cost versus full-service carriers.

“Much of this is due to its senior management being appointed from organisations such as Malaysia Airlines or Khazanah Nasional.

"Its chief operating officer, Azmir Zain formerly led aviation investments at Khazanah Nasional. Breaking down barriers to a man with this kind of legacy is no easy feat,” he alleged.

Fernandes also feels that Mavcom's functions are duplicative and could simply be assumed by other existing authorities.

“For regulatory-related matters such as route approvals, the MOT and the Civil Aviation Authority of Malaysia (Caam) are well-placed to assume existing responsibility from Mavcom.

“Disputes on aviation-related matters should and can be resolved via arbitration or mediation, failing which the affected parties would be able to resort to legal proceedings.

“In the last aspect, and as many will know, Mavcom has failed in its statutory duty to mediate the dispute between AirAsia Group and Malaysia Airports Holdings Bhd with regards to the PSC,” he said. - Bernama