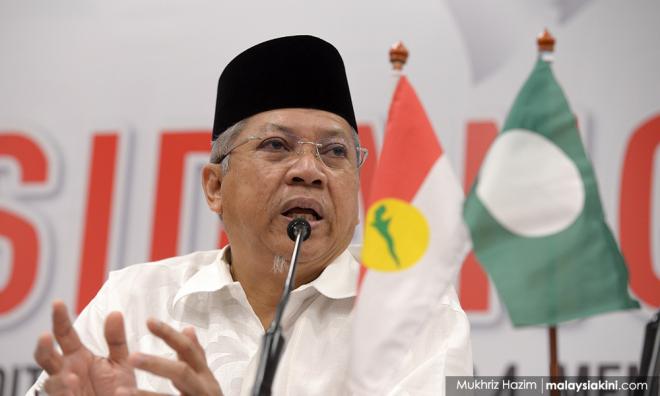 Amanah vice-president Mujahid Yusuf Rawa should not spend his time in 'prejudgment' of the Umno-PAS charter set to be launched this weekend.

So says Umno secretary-general Annuar Musa (above), who released a statement today in which he took a few digs at Mujahid's interest in the charter.

"Mujahid's writings about the charter have made me wonder what he is excited about, and why is he trying to predict the essence of the charter.

"He couldn't hide his intentions when he tried to prejudge the charter, but gave it a negative rating, even though he himself does not seem to know what the charter is about," Annuar said in reference to a lengthy Facebook post two days ago in which Mujahid mused over the future of two parties that were desperate to survive.

Annuar, who is also MP for Ketereh, added that Mujahid's speculation was akin to groping in the dark and he asked the Parit Buntar MP to be patient and not give in to sibling rivalry.

"Umno and PAS are not two- or three-year-old parties. Umno and PAS are also not small parties that are desperate to find a coalition to survive," Annuar said in a clear dig at Amanah.

The parties have their own plans, he said, and this would be revealed when the time comes.

"Umno and PAS are taking basic, but important steps. The severely divided people need to be united. Islam and the bumiputras are at the core of the nation's existence. If we are broken or weak, the country will not progress.

"The charter is not about Umno's survival or PAS' calculations. What does it mean to just survive like Amanah and Bersatu in Pakatan Harapan right now? That is not the model Umno and PAS want to follow," Annuar added.

He claimed that Umno and PAS are working together to heal the wounds of the divided community and that while they will not deliver a complete solution overnight, they have a roadmap to unity that will unfold organically.

"Umno and PAS know exactly who we are. So our steps are prudent and we will continue to support the aspirations of the people, be the voice and ears of the people and uphold the hope of the people," said Annuar, who decried the Harapan model as a fake formula that has misled the people.

"As long as Umno and PAS operate legally and peacefully in accordance with the country's existing laws and election rules, then Harapan, which respects the rule of law and sanctity of the Federal Constitution, must respect and welcome Umno and PAS' cooperation.

"Champions who are great in an arena are those who can defeat a strong opponent, not those who are crippled," Hassan said in a statement today.

If Harapan stays honest, has moderate and inclusive policies against racial and religious politics, and prioritises socio-economic issues, it will win again in the next general election, he added.