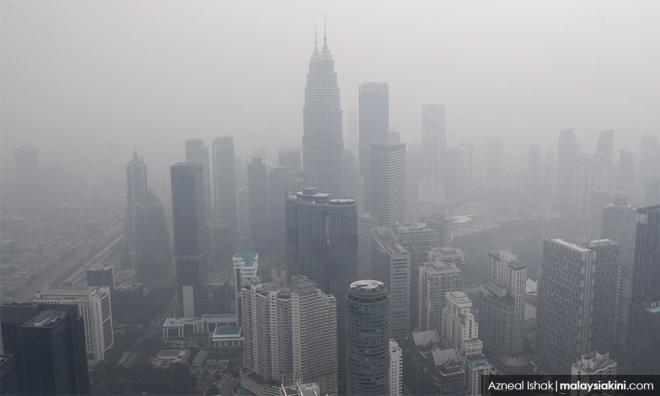 There are at least twice as many hotspots in the Indonesian territories of Sumatra and Kalimantan compared to the entirety of Malaysia, according to an analysis of satellite data that was recorded today.

In addition, prevailing wind conditions are carrying the smoke haze from these hotspots - each a potential forest fire of varying intensity - from Sumatra into Peninsular Malaysia and from Kalimantan into Sabah, Sarawak, and Brunei.

This is based on the Asean Specialised Meteorological Centre’s (ASMC) analyses of data from the NOAA-20 satellite, which is the latest of several weather satellites used by the ASMC to monitor haze in the region.

The satellite is operated by the US National Oceanic and Atmospheric Administration (NOAA), which makes the data publicly available. The ASMC is an intergovernmental body comprising weather agencies of all Asean member countries.

ASMC’s analyses found that there are 754 hotspots in Kalimantan, of which more than half (485) are rated as “high confidence hotspots”. In contrast, there are only 11 hotspots detected in Sarawak.

Over to the west, the ASMC identified 553 hotspots in Sumatra, compared to only 10 in Peninsular Malaysia.

In total, there are 1,307 hotspots in Sumatra and Kalimantan, compared to 21 hotspots sighted throughout Malaysia.

The NOAA-20 satellite images provided by AMSC also showed much Malaysia shrouded in smoke haze, which is depicted in shades of yellow in the false-colour images. Smoke plumes are also seen rising from some hotspots.

Clouds are depicted as bluish-white instead, allowing it to be discerned from smoke haze. The ASMC warns that hotspots and haze can be obscured by clouds, or go undetected because the satellite did not pass over the area.

The hotspot count from other satellites vary and is sometimes significantly higher but consistently show far more hotspots in Sumatra than Peninsular Malaysia, and in Kalimantan than Sabah and Sarawak, over the past week.

Meanwhile, an ASMC webpage summarising the haze situation in Asean showed a map that depicted prevailing winds blowing over hotspots in Kalimantan into Sarawak and then turning eastward towards Sabah.

Likewise, the same map showed winds blowing over hotspots in Sumatra and into Peninsular Malaysia.

“In Sumatra, persistent hotspots emitting moderate to dense smoke haze continued to be detected in central and southern parts of the island, leading to a significant build-up of smoke haze. Some of the smoke haze has been blown by the prevailing winds to Peninsular Malaysia and Singapore.

“In Kalimantan, moderate to dense smoke haze from persistent hotspots continued to be observed over many areas in South, Central and West Kalimantan.

"Hotspots with smoke haze were also detected in other provinces in Kalimantan. Some of the smoke haze from West Kalimantan has been blown by the prevailing winds to western Sarawak and adjacent South China Sea areas,” it said.

“There is no trans-boundary haze as some foreign media reported,” he was quoted as saying in a press release on Sunday, citing satellite data.

He said BMKG recorded at least 2,510 throughout Southeast Asia from Sept 4 to 7, and these are found in Indonesia, Malaysia, the Philippines, Papua New Guinea, Vietnam, Timor Leste and Thailand.

There is, however, he said, no transboundary haze from Sumatra to Peninsular Malaysia.

Sarawak has been the worst-hit Malaysian state in this year’s haze season, forcing nine districts to close its schools.

Conditions have also worsened in the Klang Valley over the weekend, with the air pollution reaching “unhealthy” levels.