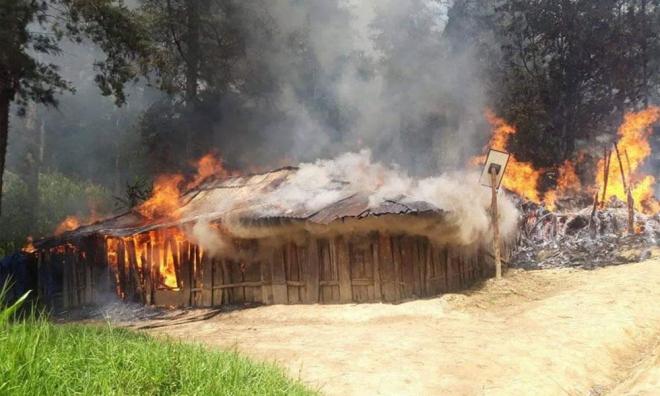 The Indonesia military is carrying out acts of violence and terror against an innocent and unarmed population, say West Papuan activists.

In an alleged attempt to cover up its actions, Jakarta has expelled foreign journalists from its provinces of Papua and West Papua, continuing a long history of isolating the region from the outside world.

It also imposed an internet blackout on the region.

"To make things worse," a West Papuan activist told Malaysiakini, "Indonesian Special Forces counter-terrorism squad Densus 88 is spreading the lie that Papuans are being influenced by the Islamic State terrorists."

"Our motive is a referendum on Papuan independence and an end to the racist treatment of Papuans by Jakarta. The irony of them claiming Islamic extremist influence is that they have been trying to impose religion on our people," the activist said.

"They came and burned down houses in the villages of Gome district in Kabupaten Puncak in Papua," said the activist, adding that information was vague because of the restrictions.

"Please help us get our story out to the world."

According to Reuters, the Indonesian authorities have arrested 85 protesters, and at least four people are dead since unrest erupted on Aug 17.

The protests concern perceived racial and ethnic discrimination, spread over two weeks in a string of Papuan towns.

Some protesters have demanded a referendum on independence, something the government has ruled out.

Papua and West Papua provinces, the resource-rich western part of the island of New Guinea, were formerly a Dutch colony that was incorporated into Indonesia after a widely criticised 1969 referendum backed by the United Nations.

Opponents of Indonesia's rule over West Papua claim that the referendum was conducted in an atmosphere of intimidation with just over 1,000 tribal chiefs selected and instructed to vote for West Papua to join Indonesia.

Waving the flag of free Papua, protesters set fire to a local Parliament building and blocked streets in the provincial capital of Manokwari by burning tyres and tree branches, while larger protests took place in Jayapura.

They were protesting the mass detention of Papuan students in Surabaya, East Java, for bending a flagpole bearing the Indonesian flag in front of a dormitory on Indonesia’s national day, which was celebrated on Aug 17.

Bachelet, a two-time president of Chile and one-time politial detainee who underwent torture during the military dictatorship of Augusto Pinochet, said she had been disturbed by reports of escalating violence.

On Sept 11, Radio New Zealand reported that thousands of Papua New Guineans marched through its capital Port Moresby in solidarity with their West Papuan neighbours.

Parkop was quoted as saying PNG citizens considered West Papuans members of the same greater clan and feel their pain.

Also this week Human Rights Watch's Australia Director Elaine Pearson called on the Indonesian government to investigate the deaths in the West Papuan unrest, including a bloody clash in Deiyai regency.