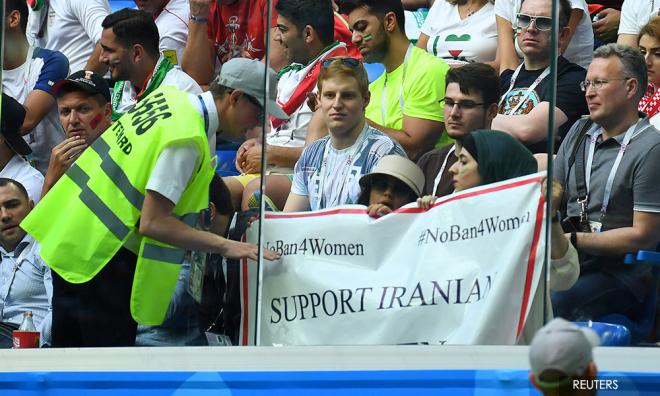 FIFA officials to visit Iran after death of 'Blue Girl'

FIFA officials will visit Iran, following the death of a female fan who set herself on fire in protest at her arrest for attending a match, the world football governing body told Reuters yesterday.

Sahar Khodayari, dubbed “Blue Girl” due to her favourite team Esteghlal’s colours, died in hospital on Monday after her self-immolation outside a court where she feared being jailed for six months having attended the match in disguise as a man.

A FIFA spokesman said that meetings with Iranian football officials, expected inside the next two weeks, were part of preparations for Iran’s World Cup qualifying games - they face Cambodia at home on Oct 10 - and were not a specific response to Sahar’s death.

The FIFA officials, however, will check the preparations made by the Iranian FA to provide access to that Oct 10 match for women.

The death of Khodayari has caused widespread outrage in Iran and internationally, and there have been calls on social media for Iran’s football federation to be suspended or banned by FIFA.

Popular Iranian exiled musician Arash Sobhani, of the group Kiosk, was among those who took to social media to protest and told Reuters that Infantino needed to take action.

“He needs to step up and do what is right. Ban the Iranian federation until they allow all the Iranian women to go to the stadium. They should be just as equal as the men,” he said.

In a statement issued on Tuesday, FIFA expressed its condolences and said it reiterated “our calls on the Iranian authorities to ensure the freedom and safety of any women engaged in this legitimate fight to end the stadium ban for women in Iran.”

Jesper Moller, president of the Danish Football Union, and a member of FIFA’s organising committee for competitions told Danish newspaper Politiken that he expects action from the governing body.

“FIFA has an independent disciplinary system and they will look at it. I will let them. And once they have given a verdict, it may well be that the case ends up with the international sports court, CAS. But that it (the stadium ban) must be punished is clear,” said Moller, who is also a member of European governing body UEFA’s executive committee.

Iranian President Hassan Rouhani’s chief of staff said yesterday that women would be allowed into stadiums if foul language in chants and sporadic violence was curbed.

“We don’t see a problem with women attending if the atmosphere in stadiums is convenient... but with so much foul language among fans and violence, this is not advisable,” Mahmoud Vaezi told state television.

He said the sports minister would contact leaders of supporter groups to “improve the atmosphere from a moral standpoint” and special areas for women would be set up in stadiums.

“If there is a well-mannered atmosphere in stadiums, we have no objection to (the admission of women),” Vaezi told reporters after a cabinet meeting.

Captain Masoud Shojaei issued a statement on Instagram, describing the match as “the most bitter and saddest win of the national team.”

“We scored two goals and won the game on the field. But we lost because Sahar is no longer,” he wrote.

“Shame on me for not having been able to do anything and shame on those who took away the most obvious right from Sahar and all Sahars.”

‘Equality is a lie’

“The FIFA statutes say that discrimination on grounds of gender is punishable by suspension or expulsion,” he said.

“If the statutes are not worth upholding, then withdraw them and let football be honest to the women of Iran. Because at the moment, despite the promise, equality is a lie,” he added.

There were signs that the situation regarding female fans in Iran was changing when a group of women were permitted to attend the second leg of the Asian Champions League final in Tehran last November.

Infantino (above) was present at the Azadi Stadium when Persepolis played Japan’s Kashima Antlers in front more than 1,000 female fans in a designated “family section”.

That came after concerted efforts from pressure groups both inside and outside Iran, who were backed by senior players and former national team coach Carlos Queiroz.

It was hoped the breakthrough, which came after Infantino discussed the issue with Rouhani, would lead to further concessions on the issue in the conservative Islamic nation.

Female fans, however, have been denied access to matches since. At Iran’s friendly against Syria in June, women were locked out of the Azadi Stadium and detained by security forces.