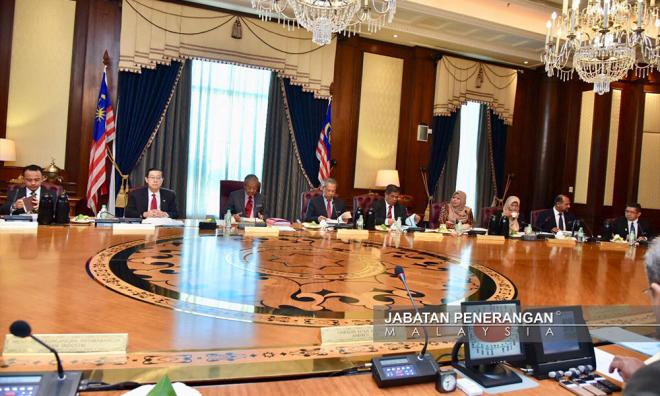 Prime Minister Dr Mahathir Mohamad is scheduled to chair a "special" cabinet meeting on Saturday and this has set tongues wagging.

According to sources, the agenda is to discuss "shared prosperity" - the Pakatan Harapan administration's theme as it entered its second year.

As the meeting will be held two days before cabinet members head to Kuching for the national-level Malaysia Day celebration, speculation is rife among political watchers that the cabinet will decide on policies affecting the territories of Sabah and Sarawak.

Holding cabinet meetings on a Saturday and twice in a week is highly uncharacteristic. The meetings are normally held on Wednesdays.

The only exception is when the Dewan Rakyat is in session, during which, cabinet meetings are held on Fridays.

Yesterday, Mahathir had chaired this week's cabinet meeting in Putrajaya.

The Economic Affairs Ministry, in a statement later, confirmed that the special cabinet meeting will discuss the country's long-term economic direction based on the "shared prosperity" concept outlined by Mahathir during Pakatan Harapan's first anniversary in government.

"This new vision shows the government's commitment to restructuring the Malaysian economy to guarantee that it continues to expand sustainably and ensures the well-being of all people.

"The intent of this vision is for all Malaysians to achieve a decent standard of living by 2030," it said.

Next Monday, the 94-year-old leader will make history as the first prime minister to attend a national-level Malaysia Day event that is hosted by political opponents.

The Saturday meeting also coincides with Umno and PAS inking a charter to formalise their political alliance.

As for the joint celebration in Kuching, Harapan and GPS leaders have denied the existence of a political motive.

Apart from Mahathir, Sarawak Chief Minister Abang Johari Openg is also expected to speak at the event, which was reportedly proposed by Sarawak DAP.