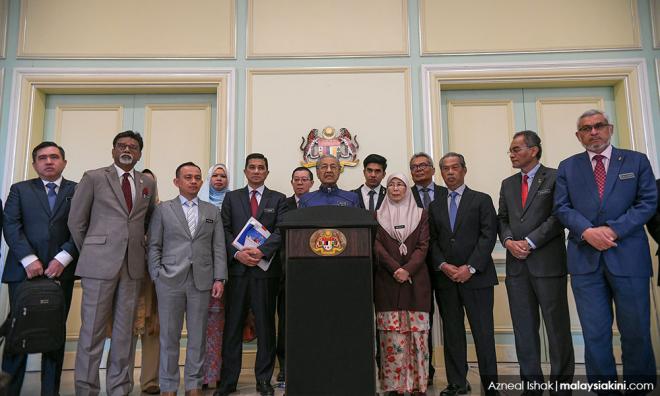 'Don't be too obedient' - A Malaysia Day lesson

COMMENT | When some supporters of Pakatan Harapan criticised the present government, one of their high priests cautioned that “ too much friendly fire” will derail the master plan and Harapan will, despite winning the first battle of 2018, be  defeated in the war.

In other words, people must be obedient and not openly criticise the government.

The original grand master plan of Vision 2020 failed because Malaysians were obedient and dared not tell the leaders (some call them visionaries)  what had gone wrong.

No one dares to question about the billions wasted on crony privatisations, on wasteful mega projects. There were huge failed investments in steel and tech companies. We had massive financial rescue plans that had to be done to save "capable bumiputeras” from bankruptcy.

The dream of Vision 2020 - that we will be a liberal democracy under the rule of law, a self-sufficient industrialised country, encompassing all aspects of life from economic prosperity, social well being, world-class education to political stability and psychological balance - is still a dream.

Extending the dateline to 2030 is a face-saving trick, and nothing more.

The same culture and attitude of quiet obedience that existed in the 1990s that derailed this country is now alive and strong today because our Harapan wants to win the war.

Now the country has a new plan called the 'Shared Prosperity Plan'. It is equally ambitious and grand in scope as the previous one but has few details (at least the failed Vision 2020 had more substance) except for the usual promise that there will be equitable wealth sharing.

As with all these “visionary plans”, the details and the implementation of those small steps that determine their success or failure are absent. I would like to suggest a few small steps to start the glorious march towards the shared prosperity plan:

1) Keep this country a democracy. Let rule of law reign. This means, in a democracy, you do not maul and kill your opponent. Please stop this primitive instinct of destroying opposing political groupings or personalities. We need to stop treating them like enemies. If we want a democratic system to be the foundational framework of this country, then respect our political opponents.

The habit of toppling and undermining those we do not like, (and preserving our favourites) has been the cause of so much instability in the country.

In Sarawak in 1965, the federal government did not want Stephen Kalong Ningkan as the leader, although he was the clear choice of the people. In Kelantan in 1978, Kuala Lumpur did not want Asri Muda and PAS in government, and they had to be toppled by a fake emergency. In 1987, Umno had to be destroyed although it could have been saved. Tengku Razaleigh Hamzah and friends, including the judges, had to go.

Umno today is still not safe from another mauling as we speak.

2) The attacks on the PAS-Umno alliance are uncalled-for. It is symptomatic of this appetite to destroy the enemy. The alliance may be whatever we described them to be - racist, xenophobic, extremists etc.

However, so long as they agree that power changes hand only by the ballot box, and not the parang or machete, then let them be. So long as they do not subscribe to violence, and cause disorder, then they must be allowed to operate as they wish.

This alliance, in fact, cements democracy because they represent a large segment of the people. If we do not like their views then, by all means, take them on, but do not isolate them. This is how the people and country can move forward, by faithfully adopting democratic practices as a guiding principle.

3) Be transparent. Transparency in government must be our top agenda. It costs nothing to keep this promise in the manifesto. Do not be selective in giving out information. It has to be disseminated at all levels. It's mischievous and wrong to leak some information about how much a particular member of the royalty spend in one year when it's convenient and served the purpose of the leaker.

Our King and Queen (whom I consider most gracious and kind) and the brother Rulers, will not mind the public knowing how much is spent on the royalty every year. This will stop all the misinformation and suspicion of how much our royalty take from the system.

Likewise, Opcom Holdings Bhd will not mind if MCMC and the minister release all the relevant information on the fibre contract. The information will help the people understand why the country needs to spend over RM25 billion on "fibreoptics and connectivity”.

The public will understand - after all, we are all moving towards shared prosperity

4) My last suggestion on this Malaysia Day - be hypocritical, as all successful politicians are, but don’t overdo it.

When we behave like we are squeaky clean and proper, and our enemies are all thieves and kleptocrats, this will divide the country further. The people know very well the history of this country, and they know which leaders are clean and who are sullied.

When we portray all the leaders of our opponents as thieves, this will be seen as a provocation. Our attacks must be measured, otherwise, a racial dimension comes to play. It can be dangerous.

We need to have peace and racial harmony, and for that we need balance. Our reactions to what our opponents do must be proportionate and must not smack of vindictiveness.

After all, in a democracy, the rule of law decides, and the courts are there to judge. There are enough rooms in prison for the thieves past and present. There is no need to huff and puff.

ZAID IBRAHIM is a former law minister and member of Umno, PKR and DAP.