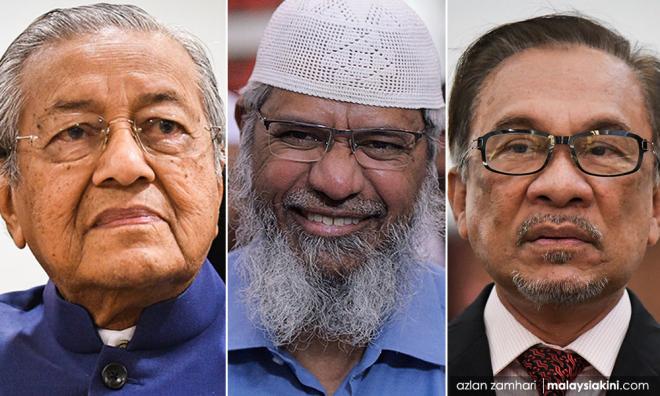 Prime Minister Dr Mahathir Mohamad has been listed in the world's 500 'Muslim Man of The Year' by the Jordan-based Royal Islamic Strategic Studies Centre (RISSC).

In its 'The Muslim 500: The World's 500 Most Influential Muslims 2019' recently released book, RISSC also listed PKR president Anwar Ibrahim and controversial preacher Dr Zakir Naik as among the figures who have an influence on the Muslim community.

Describing Mahathir as a "quite extraordinary" man who has had a dynamic political career spanning 70 years and author of 17 books, the centre listed out Mahathir's history as the prime minister and a political leader.

These include the story of how Mahathir defied the International Monetary Fund (IMF) during the Asian financial crisis and steered Malaysia's economy in 1997, criticisms against his hard stance on the Jews and Israeli, and how he led Pakatan Harapan to defeat his old party to become the new government in 2018.

Mahathir was ranked at number 44 in the list, which was headed by Turkish president Tayyip Erdogan at first place, followed by Saudi Arabia King Salman Abdulaziz Al Saud and Jordan's King Abdullah II.

Palestinian activist Ahed Tamimi, who is known for her defiance at the face of Israeli soldiers, had been named in The Muslim 500 Woman of The Year. She was ranked at number 49.

RISSC stated in the publication that Anwar is a Malaysian politician of global stature, who was expected to succeed Mahathir as the prime minister before the two had a fallout in 1998, which led to Anwar being jailed on "controversial charges".

"When the Supreme Court overturned his sodomy conviction in 2004, he was freed from jail and took up academic and other positions in the UK and USA.

"Once the term of his political ban had expired in 2008, he returned to Malaysia and was voted back into Parliament."

It also mentioned the story of how Anwar was charged with sodomy for the second time but acquitted by the High Court in 2012, to the time he was once again elected into Parliament in 2013 general election before the acquittal was overturned the next year.

"His imprisonment on sodomy charges has been condemned as unjust and a travesty by many international leaders and rights organisations."

One rank above Anwar is Zakir, whom RISSC stated as a "popular preacher and comparative religion specialist in the mould of the legendary Ahmad Deedat".

"He hosts huge public events where he speaks on all aspects of Islam and answers questions from the audiences."

The publication also states that Zakir has more than 17 million followers on Facebook and that he was recently investigated by India's National Investigation Agency.