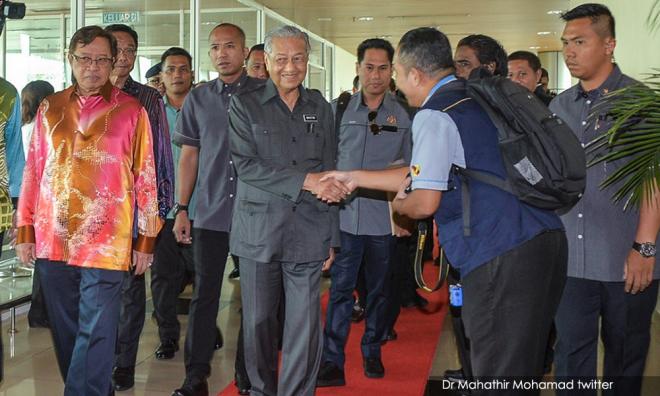 The prime minister acknowledged that prior to this, both states had not been paid enough attention compared to those in the Peninsula.

“We found that the previous government had not been giving its fullest attention to Sarawak. If we are to compare, then we are looking at an oil-rich Sarawak but yet development in the state is not equally distributed among Sarawakians themselves and also between Sarawak and the Peninsula.

“We had come to this conclusion based on studies done, and that we have to focus more on Sarawak and Sabah so that the people in two states will be treated the same as those in the Peninsula,” he said in his speech at the Berambeh (Meet 'n Greet) Bersatu Sarawak 2019 programme here today.

The prime minister made it clear, however, that the added attention on both states was not one based on favouritism.

“The reality is that although Sarawak was very much larger than other states in the Peninsula, development here is lagging behind, except in the urban areas. In the rural areas, we find the situation there is not to what we desire.

“That is why the federal government has introduced the new policy for the nation and through this (new policy) we will see a fair and equal distribution of wealth and shared development,” he said.

Elaborating on the new policy that was announced after he had chaired a special cabinet meeting last Saturday, Mahathir said the implementation of Shared Prosperity Vision policy would differ from policies introduced before this.

“We want this shared prosperity to be achieved at the end of our hard work, and not just at the beginning […] this time we want to ensure the underprivileged are given opportunities on the condition that they work hard and fully use these opportunities and not just to sell out their licences and contracts. - Bernama