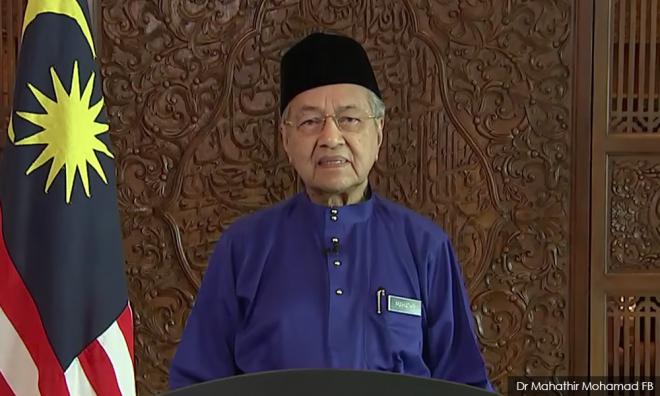 Dr M on M'sia Day: There are those who want to divide us, don't allow it

Prime Minister Dr Mahathir Mohamad, in his Malaysia Day speech in Kuching tonight, urged Malaysians to stand up against efforts to divide them.

"There are those amongst us engaging in efforts to weaken our unity.

Mahathir admitted that people could easily be caught up in such emotionally-charged issues but urged Malaysians to stand on the side of reason.

"It is easy to become caught up in issues that are close to our hearts. But if we are magnanimous, are confident in ourselves and think rationally, we will not allow them to influence us.

"After five decades in this big family we call Malaysia, I am confident that the majority of Malaysians will reject narrow thinking and continue to defend our unity," he said.

Mahathir said there would always be differences amongst Malaysians but it was important to find common ground.

"Differences of opinion among ourselves is normal, particularly at a time when we are not under threat.

"They need to be celebrated and appreciated and not become a factor that divides us.

"Difference in opinions needs to be discussed to reach the best solution for all," he said.

Mahathir said if Malaysians understood how the nation's hard-fought unity had been fostered, they would not take it for granted.

"We must remember to appreciate the difficult journey undertaken by our forefathers to achieve independence for Malaya followed by the union under Malaysia.

"If we remember what they have gone through, we will not take our unity and cooperation lightly and will rise up to defend it against those who would threaten our unity.

Mahathir was speaking at a joint-celebration by the federal, Sabah and Sarawak governments in Kuching in conjunction with the 56th anniversary of the Malaysian federation.

governance
malaysia day
mahathir mohamad
unity
Related Reports
Haze not a deterrent for joyous Hari Malaysia celebration nationwide
a year ago
Strengthen unity, mutual respect to face bigger challenges - Muhyiddin
a year ago
'Don't be too obedient' - A Malaysia Day lesson
a year ago
Let's all stand up for the Malaysian Unity Season
a year ago