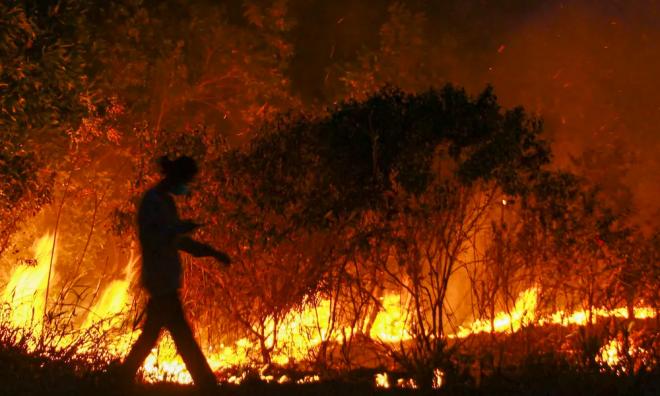 RM1 lawsuit against Indonesia for the annual haze

COMMENT | South East Asia is sadly experiencing its predictable annual haze crisis, yet again. We don’t have to reiterate its harm to human health, our economy and children’s education across Asean, all of which are easily understood and clearly felt.

Instead, we propose a viable policy option for public discourse: a lawsuit by the Malaysian Government against the Indonesian Government for RM1 (yes, 1 Ringgit) and a legally-binding commitment to put out current fires and prevent future fires.

The causes of the annual haze emergency are multifactorial. There is the palm oil factor, the “cheaper to burn than to fertilize fields” factor, the irresponsible plantations factor, the corruption factor, the (untrue) “lack of technology to fight fire” factor, and perhaps many others. With so many factors, there is no one magic solution.

However, we propose the closest thing possible to it: we seek a declaratory judgment through a lawsuit that compels the Indonesian Government to assume legal responsibility for the fires in Indonesian territory.

International litigation has precedent. In 2014, the Singapore Parliament passed the Transboundary Haze Pollution Act, an unprecedented act which allows the Singapore Government to fine non-Singaporean companies engaged in open burning in Indonesia.

Since 1947, there have been 177 disputes between countries referred to the International Court of Justice. Since 1995, World Trade Organization members have referred 573 disputes to the settlement body. In 2019, Indonesian civil society sued the President of Indonesia for a failure to tackle severe air pollution.

Our proposed lawsuit includes three other solutions in one package. One, Malaysia must continue providing technical, financial and fire-fighting aid to Indonesia, aid which becomes more effective if Indonesia is an equal partner (and in the spirit of “prosper thy neighbour”).

Two, Malaysia must take legal action in Malaysian courts against any Malaysian companies guilty of open fires in Indonesia (to avoid hypocrisy and to increase effectiveness).

The vast majority of the fires are burning in Indonesia, not other Asean countries. Unfortunately, the Indonesian Minister for the Environment and Forestry, Siti Nurbaya Bakar has claimed that the haze is due to fires in Malaysia.

According to Asean satellite data, there were 1,619 active fires in Indonesia on 11 Sept (versus 5 in Malaysia). This is corroborated by Nasa. There’s no smoke (or haze) without fire, and they’re all within Indonesia’s borders.

The logical conclusion is that the fires in Indonesia are causing the haze, yet the Indonesian Government is refusing to take moral and legal responsibility for it. Perhaps it’s easier to say “we’re not responsible” than to say “we’re irresponsible”.

Their refusal is all the more staggering when one considers that Indonesians themselves are currently suffering from the worst air quality readings in the world. In their refusal to admit responsibility, the Indonesian Government is failing its citizens.

We understand that this unprecedented lawsuit, even for RM1, could be geopolitically fraught in an Asean that prizes non-intervention and national sovereignty. We do not seek unnecessary tension, but we are also aware of the failures of the status quo over the last 20-25 years and we want the widest range of policy options to resolve the annual haze crisis.

These are the steps that have failed for 20-25 years: the Asean Agreement on Transboundary Haze Pollution signed in 2002, Malaysia’s National Haze Action Plan (no details are published), bilateral diplomacy, and the annual prayers for rain.

Therefore, although seemingly drastic, we believe this lawsuit is a viable policy option that is warranted because of the annual failures of normal diplomatic channels and all other steps.

This is our proposal: Malaysia (with or without Singapore and Brunei) initiates a lawsuit against Indonesia at the International Court of Justice for the symbolic value of RM1 and a legally-binding perpetual commitment to prevent future forest fires.

While the precedents for cross-border pollution lawsuits can be more extensive (notwithstanding the increasing number of cases of climate change litigation), we can certainly set our own. Any lawsuit must demonstrate that there is a Duty, Breach, Cause and Harm. In all four elements, our case is strong. Indonesia has a duty to protect the South-East Asia commons (including Indonesia herself), a duty which has been breached and has caused harm to its own citizens and in South-East Asia.

We propose RM1 for three reasons. One, it’s extremely difficult to calculate the exact damages,. Two, any calculation on the actual number will waste crucial political energy and distract from the aim of putting out the fires. Three, asking for billions of Ringgit in damages will spark unnecessary tension.

We acknowledge that this lawsuit could threaten the geopolitical balance in Asean. We want a constructive lawsuit and not an aggressive or punitive posture, further explaining the symbolic figure of RM1.

On balance, we believe that a lawsuit that compels a legal responsibility on the Indonesian Government is both respectful and morally necessary, for their citizens and for ours.

The answer is in Indonesia

Although we don’t wish to interfere with Indonesia’s sovereignty, we believe the Indonesian Government has both moral and legal responsibility for the fires in their territory.

Although we also believe that the nation state is rapidly becoming irrelevant in the face of cross-border and species-wide challenges like climate change, refugees and haze, we believe that the Indonesian Government retains the sovereignty and political, technical and legal capabilities to fight these fires. Malaysia will help, but it starts with an acknowledgement of responsibility.

We believe that it is possible to be neighbourly, and yet assertive of our own rights to health and clean air. Together, we must fix the forest fires in Indonesia by all means possible.

If someone is not admitting his responsibility, we must impose accountability on that person by all reasonable means possible, including assigning legal responsibility where appropriate.

The health of South East Asians and Indonesians is under mortal threat by the raging fires in Indonesia. Accountability must be imposed where it is fair. A lawsuit of RM1 is one viable policy option for Malaysia.