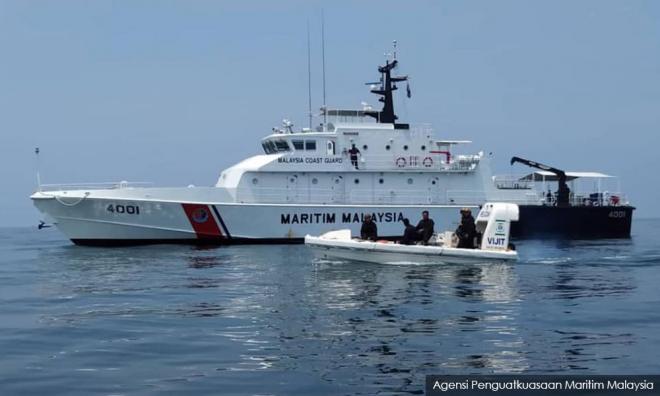 MMEA foils attempt to smuggle RM70,000 worth of syabu

The Malaysian Maritime Enforcement Agency (MMEA) yesterday foiled an attempt to smuggle RM700,000 worth of syabu, believed to have originated from a foreign country and intended for sale elsewhere, with Malaysia used as a transit point.

In the incident which took place at about 5.30pm along the shores of Batu Laut, Tanjung Sepat, a maritime team patrolling the waters in the area came across a Proton Saga car parked near the shore, with a man standing by the vehicle and behaving suspiciously.

When the team tried to approach the man, he ran into a nearby mangrove forest while the car sped away from the scene, located about 50 metres away from the Banting-Port Dickson main road.

According to Selangor MMEA director Mohammad Rosli Kassim, the patrol team found a cloth bag on the shore, containing the drugs weighing about 10kg and comprising compressed squares packed in 10 ginseng tea packages.

Speaking at a press conference in Port Klang today, Mohammad Rosli said authorities believed the man who had escaped on foot was waiting on the shore for a middleman to smuggle the drugs out of the country by sea.

It was believed that the drugs were being smuggled out of Malaysia, as they fetched triple the price in neighbouring countries, he said, while not discounting the possibility that they could have originated from China, due to the labelling on the tea packages.

The MMEA is actively searching for both the man and the car driver, in cooperation with other enforcement authorities, while further investigations into the case are underway in accordance with section 30 of the Dangerous Drugs Act 1952.