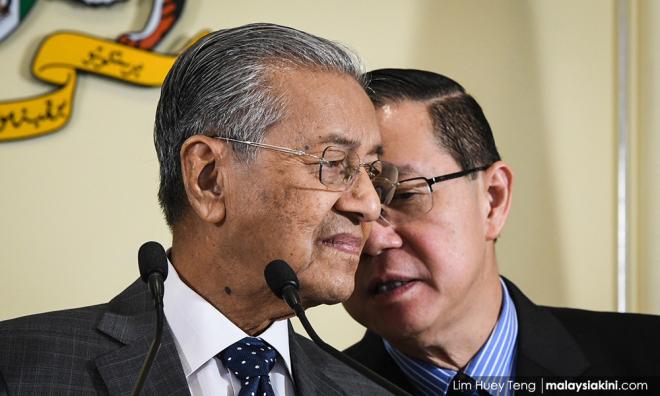 YOURSAY | ‘Just who is running the Finance Ministry? Is Mahathir up to his nonsense again?’

'Did I sign the letter?' Guan Eng on RM450m direct negotiation project

The Third Man: A RM450 million project awarded under direct negotiation and the letter is addressed to the Prime Minister’s Department from the Finance Ministry; if indeed it’s true, what are we to make of it?

Firstly, what is the standing SOP (standard operating procedure) on project amounts which must have attention and subsequent approval by the finance minister?

Secondly, letters issued out by the ministry’s departmental heads must be backed by documentary proof of the finance minister’s own approval on the project, if not it will be deemed void; or was it directed from outside, and if that was the case, where is the written instruction on it?

Indeed, should it be true the PM has bypassed set SOP and made a unilateral decision, it would be a huge mistake against Pakatan Harapan’s avowed aim on open tenders.

On the other hand, given that both the PM and the finance minister has denied knowledge of the letter, it would be interesting to find out just what has really transpired or is it another act of sabotage?

Pelanduk: As the captain of the ship, he should know what is happening on the ship. How can such a big contract of half a billion ringgit being awarded by direct negotiation being given out without his knowledge or his approval?

If it is half a million contract, no one will make much of an issue out of it. If he can give the reason that there are too many documents or letters to sign as an excuse overlooking the said contract, likewise former PM Najib Razak can use the same excuse that he did not know who put the money into his bank accounts.

Annonymous: Prime Minister Dr Mahathir Mohamad said he will check as he was not aware of such a thing. "I don't know, I never approved anything, but I have to check on this.”

Finance Minister Lim Guan Eng said: "Was it (letter) signed by me? Was it signed by me?" he asked after a reporter questioned him about the letter. Lim said he needs to do an "assessment" first as the letter was not signed by him.

The rakyat just wants to know a simple yes or no answer, and whether the allegation is true or false?

If the exposure of this corrupt act is true, the PM's and finance minister's indecisive wishy-washy responses and claims of ignorance is the same Umno's SOP and typical behaviour of the kleptocrat's and corrupt Umno's reaction and similar defensive acts when questioned on the 1MDB approval of multi-million/billion through the Finance Ministry.

If Lim does not know of a RM450 million project under direct negotiations, then he should resign as finance minister.

Existential Turd: Obviously, the PM allowed someone else to sidestep the Finance Ministry in approving this huge contract. This is just another proof that Lim is nothing more than a glorified accountant with no real power.

He is only there to clean up the mess left by corrupt and incompetent cronies and to provide a facade to placate Chinese voters.

Constitutional Supremacy: Most civil servants are still loyal to the old regime. It is a known fact that such violations are still being done although there is a Finance Ministry circular warning against it.

Lim also warned about one month ago that there are some allegations of noncompliance and if ministry comes to know of it, action will be taken.

It is obvious that some reporters are working hand in glove with the old regime and thus putting unreasonable pressure on Lim for an immediate explanation when the matter needs to be investigated first.

The reporters’ pressure for an immediate answer is to try to elicit some information that would contradict Mahathir. To these reporters and cybertroopers, sorry, your time is running out.

Khan: Please, let’s not be partisan on this issue. If they have done something wrong, they should be stopped from continuing such wrongdoings.

If you think partisan and make this kind of deals ‘kosher’, the financial loss is on you, the taxpayers and citizens.

Cogito Ergo Sum: The entire cabinet is accountable to the rakyat who put you in power. Your first allegiance is to the people. Not the party or the PM.

This not the BN era where you can give evasive answers. A RM450 million project surely would require your approval internally first before it goes to the PM for the green light.

And if it is a red herring, the Harapan government must prosecute those responsible to the fullest extent of the law.

Hafidz Baharom: Is Lim saying people in the Finance Ministry are signing letters of deals worth RM450 million that the finance minister himself doesn’t know?

Jay: Whether Lim signed the letter is irrelevant. If it's issued on the Finance Ministry letterhead, he has to take responsibility.

Or maybe the dispatch boy got hold of Finance Ministry letterhead and awarded the contract?

MS: A RM450 million project is not something one forgets easily, especially since it was approved and signed off as recently as July.

Something stinks here. Just who is running the Finance Ministry? Is Mahathir up to his nonsense again? Or is Lim faking ignorance?

Or is some covert action happening under both their noses, Sandakan-style?

BagusCurryPuff: Get your act together and start walking the talk - if you don't implement full transparency particularly in contracts like this, what is the point of electing you?

We may as well get Umno back in power - at least, they make no pretence about being thieves.