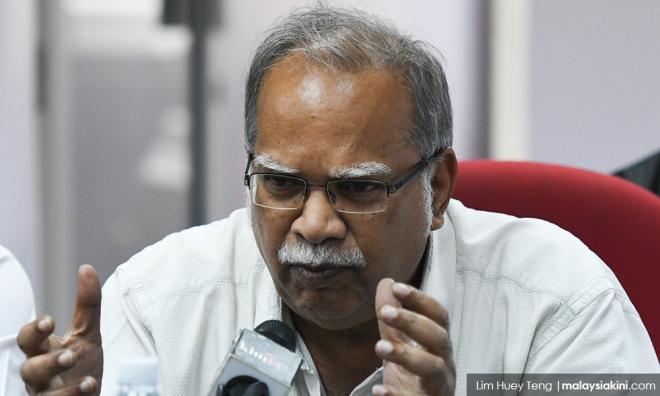 Who am I, peacemaker or terrorist?

ADUN SPEAKS | For more than a year I have been accused of supporting, sometimes being a member of the now-defunct Liberation Tigers of Tamil Elam (LTTE).

If I'm not mistaken, more than 60 police reports were lodged against me last year by both individuals and organisations, for being upset with me for questioning the presence of fugitive and Islamic preacher Dr Zakir Naik in the country.

On the basis of the police reports, police interviewed me twice to take my statements pertaining to the allegations that I am a supporter of the LTTE.

Recently, a video has been circulated in the social media of my presence in a Tamil gathering, where pro-LTTE placards and banners were displayed, including of the former leader of the LTTE, V Pirabhkaran.

This video is an old one of a gathering that took place in Kuala Lumpur more than ten years ago.

It was gathering of Tamils to welcome Seeman, the leader of a political movement called Naam Tamilaar in Tamil Nadu, India.

Some enthusiastic participants carried these banners and portraits to show their support for the Tamil cause in Sri Lanka.

I was invited to the event in which I gave a talk.

It was a welcome event for Seeman and not about the LTTE but about the sad plight of Tamils outside India.

The video was downloaded and distributed in the social media to establish “my association” with the LTTE.

It was a mischievous attempt by those who are upset with me for being a vociferous critic of Zakir.

I have consistently maintained my stand that Zakir should be deported to India to face charges of money laundering and for supporting terrorism by the government of India.

Before these individuals or organisations make all kinds of allegations of my links with LTTE, let me give a brief background of how I came to relate to LTTE, Gerakan Acheh Merdeka (GAM) and some rebel movements in Colombia, Latin America and the Philippines, especially in Mindanao.

As a political science academic, I was interested in the transformation of conflicts in various countries, particularly class and ethnic conflicts.

I wanted to adopt a methodology that examined the interests and concerns of all parties to conflicts, not necessarily the state actors.

Such an orientation meant that I had to examine the reasons and motives of the non-state actors in different geographical locations.

This is the reason why I chose places like Sri Lanka, Aceh in Indonesia, Mindanao in the Philippines and Colombia in South America.

My point was how to engage the non-state actors, understand their grievances and how they could engage the state in a conflict transformation that placed a premium on negotiated settlement rather than armed struggle.

It was this underlying principle that enabled me to develop contacts with the state actors and the rebel organisations such as the LTTE in Sri Lanka, GAM in Aceh and some amorphous groups in Columbia and Mindanao.

Acted as advisor for the Acehnese delegation

My involvement in the Constitutional Affairs Committee (CAC) in Sri Lanka in 2003 was basically to expedite the peace process initiated by Norway.

Our role was basically to bring the government of Sri Lanka and the LTTE to the negotiating table with Norwegians as the mediator.

It was during my involvement with CAC, that had made contacts with some LTTE and Sri Lankan government leaders including the present prime minister Ranil Wickermesighe.

In the case of Acheh, I was requested by GAM leaders to assist them in the peace negotiations with Indonesia in Helsinki in 2005.

I was not directly involved in the negotiations, but acted as an advisor for the Acehnese delegation.

However, I had limited success in making in-roads in Columbia and Mindanao.

Lack of communication with parties in the conflict, the absence of credible mediators and above all the high degree of mistrust and suspicions were not conducive to my involvement in these places.

During the course of my involvement in the peace process in both Sri Lanka and Aceh, I had the opportunity to travel to a number of European cities to engage in preliminary talks and negotiations.

I was not a mere emotionally unattached participant in the process in both the countries.

I had great degree of sympathy for the Tamil cause, their discrimination by the majority Sinhalese but I felt that armed struggle was not the best way out.

I had the same feeling towards the Acehnese and how they suffered historically under the colonial governments and later under Indonesia.

But then I did not agree that armed struggle was the best way to go about.

The Helsinki peace agreement between GAM and Indonesia in August 2005 vindicated my stand on the need for a negotiated solution.

However, the return of the armed conflict to Sri Lanka dashed all hopes of a peaceful negotiated settlement.

In May 2009, the LTTE was decimated in the final war with devastating consequences for Tamils in the north and east of Sri Lanka.

It is up to people to assess my links with the now-defunct LTTE or GAM, but my engagement in the peace process should not be disparaged.

I am happy that peace has finally returned to Aceh, but I am sad to realise that normalcy has yet to be restored in Tamil areas in Sri Lanka.

It is strange why my detractors do not link me with GAM in Aceh, but only the LTTE.

Before the peace deal became a success, GAM was regarded as a terrorist organisation by Indonesia?

Is it because my detractors find it difficult to accept the fact that I worked closely with Acehnese, who are Muslims?

Is it because they find it difficult to accept that a non-Muslim like me can also assist Muslims?

Why didn’t they link me to Muslims groups in Mindanao fighting for a decent deal from the government of the Philippines?

Or that matter my peace initiatives in Colombo?

If I am labelled as a “terrorist” for supporting the struggle of ordinary people in places like Sri Lanka, Aceh, Colombia and Mindanao, I have no further comments but let others decide.

Every time I bring up national issues to the public, there are individuals and groups who will be politically motivated to label me as “terrorist” or any other extreme obnoxious labels.

I am not worried. As an elected representative, I will not allow all these deliberate hindrances to prevent from discharging my duties without fear or favour.

politics
peacemaker
terrorist
p ramasamy
zakir naik
ltte
sri lanka
Related Reports
PAS questions status of probes into 'Ramasamy and rifle', 4 others
a year ago
Zakir Naik a clear and present danger
a year ago
Does DAP need a friend like Perlis' mufti?
a year ago
MIC MP: LTTE is not a terrorist group
2 years ago