Indonesian police fired water cannon and tear gas to break up protests in Jakarta yesterday evening, as tens of thousands of students gathered in cities nationwide over issues that included a new criminal code that penalises adultery and revised laws on corruption.

President Joko Widodo last Friday ordered a delay in Parliament's vote on the new criminal code, which would replace a Dutch colonial-era set of laws, saying a new Parliament should deliberate on the bill next month.

The revisions to the code also include penalties for sex outside marriage, insulting the president's dignity, a four-year jail term for abortions in the absence of a medical emergency or rape, and a prison term for black magic.

Though the vote was not included in yesterday's plenary session in Parliament, some lawmakers have said they would try to come up with a new draft to bring it to a vote before their current term ends at the end of this month.

Students, often wearing colourful jackets from their alma maters, gathered in cities across the country.

One banner held by a woman in a photo posted on social media read: "My crotch does not belong to the government."

Thousands gathered in the front and back entrances to Jakarta's Parliament building, demanding to meet with Parliament speaker Bambang Soesatyo. 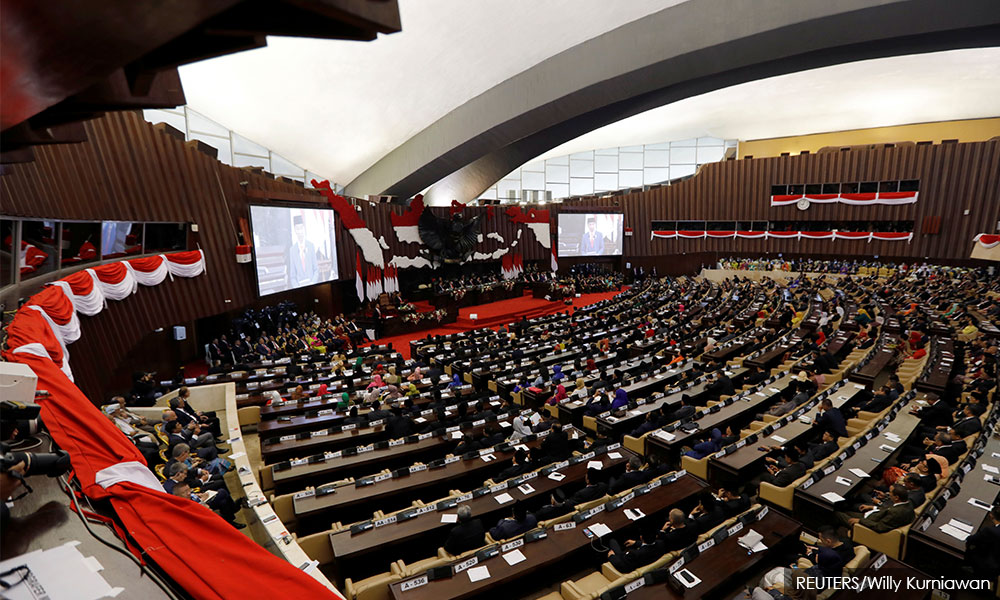 Soesatyo held a news conference inside the building urging calm, but refused to answer questions from reporters on whether the vote would be delayed until new Parliament takes office, repeating the vote could happen in the current term.

Police then fired water cannon and tear gas in an attempt to disperse the crowd.

Finance Minister Sri Mulyani told reporters she hoped "the things that triggered (the demonstrations) can be discussed through the available political process so there won't be a wider impact on sentiment".

Thousands of police on standby

On the main street through the capital Jakarta, hundreds of others were marching down towards Parliament after protesting in front of the presidential palace, blocking traffic.

"We're going to Parliament to oppose the new law for the anti-corruption agency that are not pro-people but are pro-corruptors," Fuad Wahyudin, 21-year-old student from an Islamic university in West Java, told Reuters.

"The criminal code is the same, it doesn't side with the people," said Wahyudin.

Though the president had ordered a delay in the criminal code, Wahyudin said he wanted to make sure Parliament does not pass the bill into law until they change it to reflect demand from protesters.

President Widodo told Indonesians this month he would not compromise in the fight against graft, amid concerns over the officer picked to head the anti-corruption agency and proposed changes curbing its right to wiretap suspects without a warrant.

Students had stayed in front of Jakarta's Parliament until nearly midnight on Monday, breaking part of the fence and blocking a toll road.

Media reports said more than 5,000 police personnel have been deployed to maintain security in Jakarta.

What does the bill say?

It includes a maximum one-year prison term for a couple who has extra-marital sex and a maximum six-month prison term for unmarried couples who live together. Prosecution can only proceed if a village chief files a complaint, and parents or children of the accused do not object.

Although it does not explicitly outlaw homosexuality, some fear the criminalisation of extra-marital sex and new obscenity laws could form a legal basis for persecuting gay people.

While the proposed ban on extra-marital sex has grabbed headlines abroad, the bill covers 628 articles in total and opposition in the country of 260 million people is based on a much wider set of concerns than sex.

The bill also penalises people who criticize the president's honour; teachers of Marxist-Leninist ideology; and women who have abortions in the absence of a medical emergency or rape.

It gives local governments the right to introduce so-called "living laws" not covered in the penal code, including sharia-inspired regulations such as the mandatory wearing of the hijab, or Islamic scarf.

Why is it being introduced?

Indonesia currently uses a version of the criminal code drawn up by Dutch colonists. It took effect in 1918. There have been proposals to change it since independence in the 1940s.

Widodo first brought it to parliament in 2015. Initial attempts to revise it collapsed, but it gained traction after this year's general election with the terms of current MPs due to expire this month.

A parliamentary vote had been expected this week, but Widodo put it on hold for further discussion in the face of public pressure and after headlines abroad on the possible ban on extra-marital sex sent a scare through the tourist industry.

Rights groups say that it is an affront to basic human rights. Many opponents of the bill say that it deepens conservative Islamic influence in the world's most populous Muslim-majority country, which nonetheless has substantial Christian, Hindu and Buddhist minorities.

Opponents also argue that it reverses liberal reforms enacted after democracy was restored in 1998, when strongman leader Suharto stepped down.

Critics say some articles were rushed and that implementation is unclear.

The bill has the support of some Islamic groups in a country where conservatism has been on the rise. One group, Nahdlatul Ulama, said the revisions reflect "the character and the personality of the Indonesian people and the nation".

Several religious-based parties have endorsed the more conservative elements of the bill, seen as likely to appeal to their constituents.

Some conservative groups want to seize on the momentum to promote stricter interpretations of Islam in the legal system. One advocate last week said she wanted the bill strengthened to specifically outlaw all expressions of homosexuality.

What could it mean?

The ban on extramarital sex is a big concern for the tourist industry. Australia already warned visitors to Bali of the risk they could face from extra-marital or gay sex should the law be passed.

However, officials have pointed out that prosecutions of foreigners under the bill - even as it stands - are unlikely. There has to be not only proof that extramarital sex happened, but also a complaint from a family member.

Parliament had been due to vote on the bill on Tuesday and a vote could still take place before the end of the month.

However, Widodo has said the bill should be delayed until the new parliament is in place and in order to get more input on "what the people want". That means it could delayed for a long period or even indefinitely.