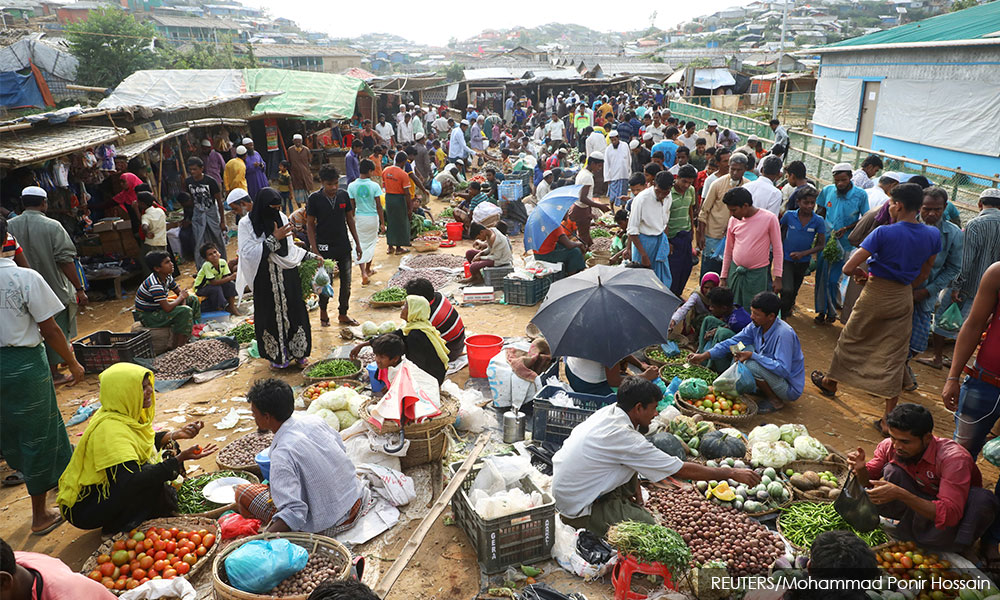 Prime Minister Dr Mahathir Mohamad has sounded a clarion call for the international community to put the Rohingya crisis squarely on its radar with a view to resolving it now.

Speaking at his first engagement since arriving in New York for the 74th Session of the United Nations General Assembly (UNGA), he said it was clear that the Myanmar government was unwilling to take any action to resolve the crisis.

"Therefore, it is left up to us, the international community, to do something about the situation," Mahathir said at the high-level side event on the 'Rohingya Crisis - A Way Forward' held at the UN headquarters in New York today.

For a start, he said, the UN should play its role, taking into account that it was established in hopes of preventing human-made miseries.

"But its silence (on the Rohingya issue) is deafening," he said, taking aim at the world body which is holding its annual gathering this week.

Mahathir also did not mince his words over what transpired in Myanmar's western Rakhine state, from where members of the Rohingya Muslim ethnic community have fled in droves in search of safety.

"Let's start by calling a spade, a spade. What happened in the Rakhine state is genocide. What took place were mass killings, systematic rape and other gross violations of human rights," he said at the event, which was also attended by his Bangladeshi counterpart, Sheikh Hasina Wazed.

Mahathir said this resulted in the Rohingyas fleeing the country en masse, most ending up in Cox’s Bazar in Bangladesh.

"On this, we commend Bangladesh for all it has done in hosting more than 1.2 million Rohingya refugees," he said, adding that Malaysia, on its part, had also tried to do all it could.

Apart from rendering humanitarian assistance, Malaysia is operating a field hospital in Cox’s Bazar, besides hosting close to 100,000 registered Rohingya refugees, with many more unregistered.

"While this may seem like a small number compared to those in Bangladesh, plenty of resources have been dedicated to allowing them to live a decent life while they await relocation to a third country. We will continue to help the Rohingyas within our means and capacity," he pledged.

In a message to other countries, Mahathir said: "We hope others would also join us and Bangladesh in our resolve to end the miseries that have befallen the Rohingyas. We need to put an end to the crisis and we need to do it now."

The prime minister drove home the point that the longer the refugees stayed in the camps, the more desperate their situation would become.

"As it is, the refugees have become vulnerable to other forms of exploitation. They become likely targets for cross-border crimes such as human trafficking and sex slavery, among others. In other words, they can only see a bleak future ahead," the Malaysian prime minister said.

The situation in Myanmar, he said, was not any better as many Rohingyas had become internally displaced persons (IDPs) languishing in camps in Rakhine.

Mahathir said when the world likened the IDP camps to those notorious concentration camps of the past, the Myanmar government had been quick to deny it.

"Yet, the Myanmar authorities have denied access to some UN officials and humanitarian aid workers. If Myanmar has nothing to hide, why bar others from seeing the situation in Rakhine? Let these officials and aid workers visit, inspect and assist those living in the camps," he said.

Mahathir stressed that Myanmar should demonstrate that it was serious in alleviating the crisis, and in doing so, repatriation should be the main priority.

The prime minister drew the attention of the event attendees that two attempts had been made to repatriate some of the refugees, and both had failed.

"Reasons for this are obvious. No one would return if they do not feel that their safety is guaranteed. On this, Malaysia will continue to insist that repatriation be done in a safe, voluntary and dignified manner," Mahathir said.

He said this could only be done by granting full citizenship to the Rohingyas.

"However, the Myanmar authorities have manipulated the Rohingya issue to incite fear, hatred and violence. Thus, merely considering the idea of granting citizenship is unacceptable," he said.

Without Security Council action, he said, others must do their part to resolve the crisis and bring perpetrators to justice, commending the effort of the Organisation of Islamic Cooperation (OIC) in addressing the Rohingya issue at the international fora and for the decision to bring the matter to the International Court of Justice.

"We hope other countries would support the OIC to ensure that the perpetrators do not get away with the heinous crimes they have committed," he concluded.