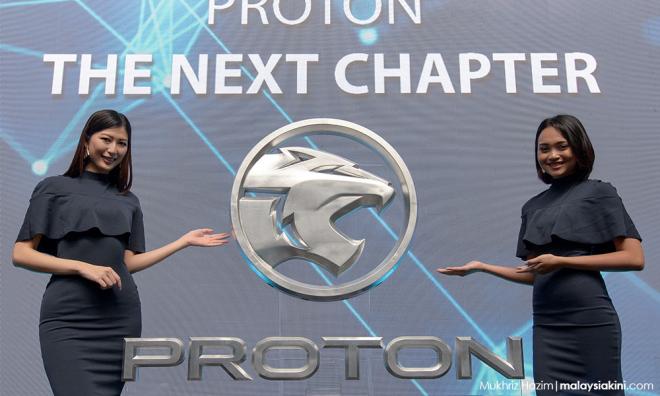 Yoursay: Proton - let the product, and not the logo, roars

YOURSAY | ‘It should focus on improving quality and reliability, and the product will speak for itself.’

Proton 'frees the tiger' in new logo, wants to roar in global market

Siva 1967: Proton was hoping for a change in fortune when it ditched its original crescent and multi-pointed star logo, similar to the ones in the Malaysian flag, to a logo featuring a roaring tiger.

Now, Proton has upgraded its logo to feature a different tiger. And designers, including chief designer Azlan Othman, must have been handsomely just to re-align and tweak the existing tiger logo.

It is very rare for a car manufacturer to change the logo displayed on their vehicles. But over the past three decades, Proton has already completely overhauled its logo at least three times.

Perhaps it is time for Proton to give prominence to other areas besides the logo on why its cars have not been able to penetrate and capture a sizable percentage of the international market.

Despite being around for more than 30 years, Proton has been easily overtaken by newcomers in the international market, especially the Korean carmakers.

I believe the answer lies with Proton’s previous crutches mentality. As a government-linked company, Proton failed to adopt the right mentality needed to compete and succeed in the tough car industry.

Just like other Malaysian government-linked companies (GLCs) like Malaysia Airlines (MAS), the former Proton management knew that no matter how bad the company performs, the government is always there to bail it out using public funds.

There was no pride whatsoever to do a good job and deliver a good product.

Despite only 40-odd years ago since experiencing a genocide by the Khmer Rouge, the Cambodians have moved on and are working hard each day to ensure the standard of their country improves.

There is no crutches mentality or bailouts of companies by the government, and the country is experiencing a GDP of over seven percent for the past six or seven years.

In Cambodia, every young adult is craving to learn to speak in English to improve themselves.

And here in Malaysia, instead of finding ways to compete with other nations, we are still bickering over the introduction of khat lessons in our schools and other petty issues.

Anonymous 1547638541238: Why is the tiger in the new Proton logo toothless? Anyhow, I don’t think car buyers are interested in logos when they are choosing a car to purchase.

Honda, Toyota, Hyundai and almost all the other established carmakers maintained their logos, but focused on improving the quality, reliability and performance of their products. These are exactly the qualities buyers look for in a product.

So, I hope Proton doesn’t go around spending money to promote the new logo. Instead, the Malaysian car company should focus on improving quality and reliability, and the product will speak for itself.

I wish Proton the best of luck in their endeavour and provide one clear advice - please don’t use Malaysian taxpayers’ money again to bail out the company.

After all, taxpayers will now have to contribute to our third national car…

Pro-Justice: Why should taxpayers contribute any money to the third national car project?

Though it is supposed to be a wholly private enterprise, expect Prime Minister Dr Mahathir Mohamad to find ways and means to support it through taxpayers' money.

As such, please no more taxing the poor to fund the rich.

We should stop giving importance to stuff like BR1M (Bantuan Rakyat 1Malaysia), khat, subsidies, ‘ketuanan Melayu’ (Malay supremacy), corruption and blaming others for everything, which are all detrimental to the growth of the nation.

Success is a simple formula, but we complicate it with so many unrelated emotional burden. Open your eyes and move ahead.

Abcd: It is a good move by Proton to upgrade its tiger logo.

Proton should have changed the logo a long time ago. I am surprised nobody picked it up but the old logo always reminded me of a sick coughing tiger. Just look closely.

Weijian: Before Proton can think of competing in the international car market and become a global brand, it should attempt to contest locally first without any tax advantage over other foreign car brands and without any aid from the government.

Pelanduk: Freeing the tiger on the Proton logo is just a gimmick. What is more important is free the employment opportunities in Proton to all races.

Appoint the best engineers and executives, regardless of race and creed. Free Proton from political interference.

It looks like Geely and the Chinese may have revived Proton and saved it from extinction.

Righteousness 4 All: Regardless of which logo is on the car, it has to be recognised that since coming on board, Proton CEO Li Chunrong and his team have done a wonderful job to improve Proton’s sales and the overall quality of the cars.

After all the troubles in recent years, it is now all systems go on the culture of excellence, merit, competency and reliability for Proton.

Anonymous_1cfb3ab6: Indeed, Proton’s revival following the sale of a stake to China carmaker Geely can be a model for the revival of the hopeless MAS.

Proton 'frees the tiger' in new logo, wants to roar in global market
24 Sep 2019
Proton continues upward momentum: Kenanga Research
23 Sep 2019
Yoursay: Sell off MAS and save taxpayers money
19 Sep 2019
Yoursay: Flying into oblivion with a car no one asked for
30 Aug 2019