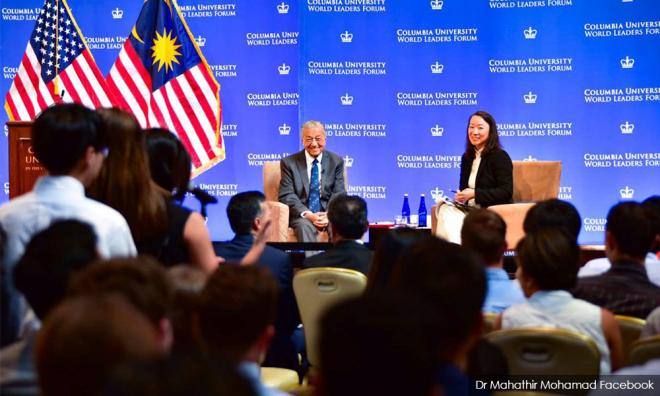 “The problem is that we don't respect the UN. Big countries, powerful countries just disregard the UN and the resolutions that they make,” he said.

Mahathir noted that when the big countries disregarded the resolutions of the UN, small countries would follow suit, and now even small country such as Myanmar could thumb its nose at the world body.

“And because we’re helpless to do anything, what we’re seeing now is that resolutions made by the UN don't seem to affect the thinking or policies of any country,” he said.

Mahathir, who is in New York for the 74th Session of the United Nations General Assembly (UNGA), said this when responding to questions from the floor at the World Leaders Forum at the Columbia University this major US city yesterday.

On the Rohingya crisis, Mahathir said there was a very clear weakness on the part of the UN in that when it saw a government being brutal towards its own people, but the UN could not do anything.

“We can preach, we can pray, we can ask them please don’t do such things, but they can continue doing it because we don’t invade countries to remove such regimes,” the prime minister said.

He expressed disappointment in once democracy icon Aung San Suu Kyi for not supporting those in dire straits in her country of Myanmar.

Mahathir said when Suu Kyi (photo) was confined to her house, Malaysia sympathised with her and campaigned to get her released.

“But now we find that she’s not standing up for other people who are distressed,” he said, noting the sad truth that the world was really not in a position to help its inhabitants despite the talk of human rights and so on.

On China, Mahathir said Malaysia wanted to remain friendly with the powerful country and would not unnecessarily annoy it.

“They claim that the whole South China Sea belongs to them, that is their claim. So long as they allow ships to pass through (the waterway) that’s okay,” he said.

“We can also claim that Australia belongs to us but Australia won’t care simply because it’s not going to happen,” he quipped.

The biggest threat to multilateralism

The prime minister said the fact remained that the South China Sea, as well as the Straits of Malacca, were vital for East-West trade and that China itself would suffer if the waterways were closed.

He also said that the biggest threat to multilateralism is unilateralism that happens when powerful countries opt to do things their own way, he said.

He said that in these instances, such countries would not consider the feelings or the thinking of other countries.

“But because of their strength, they decide to make decisions and do things on their own - in their own interest without due regard to others who are affected by whatever it is that they do,” he said.

On how multilateralism worked for Malaysia, the prime minister pointed out that the country had always believed in solving things through negotiation, arbitration or the court of law.

“If we had espoused unilateralism, we would have solved problems through confrontation and even war. But we’ve never done that. Instead, we have negotiated with our neighbours,” Mahathir said.

He noted that power-sharing among the various races to rule the country also constituted multilateralism in the case of Malaysia.

Mahathir observed that the world today had become so interconnected and smaller, with what countries do would affect other countries.

“So multilateralism is something that's unavoidable now. Acknowledging that, Malaysia, which has been a trading nation for a long time, decided that the bigger world would become a bigger market. Now we have the whole world as a market.

“Because the whole world has become a market, it’s important that all the countries of the world remain at peace and stable and are able to become a trading partner for us,” he said.