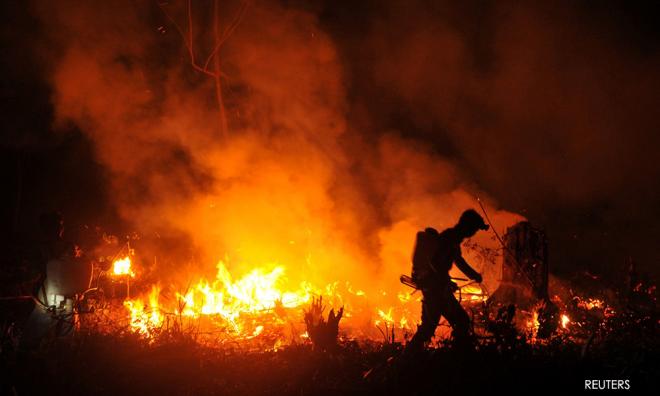 World can do nothing to stop forest fires, laments Dr M

The current international system is such that there is nothing that the world can do to compel Indonesia to deal with widespread forest fires contributing to the haze situation in parts of Southeast Asia, Dr Mahathir Mohamad said.

The Malaysian prime minister drew a parallel with the forest fires that occurred in Brazil.

"As you know the new president of Brazil believes in burning the forest for more agriculture (activities), and nobody has stopped him yet. So I think the system does not allow us to interfere in the internal affairs of other countries.

"….You can blame Indonesia, you can criticise them but they'll continue to have their fires," Mahathir said at a dialogue session at the World Leaders Forum at Columbia University in New York yesterday.

Mahathir was asked whether stronger actions like economic sanctions or leveraging the international community to speak up against Indonesia would help address the haze problem, given the gravity of the situation.

The prime minister noted that there would come a time when forest fires would become so severe that the whole world would be enveloped by haze.

"At that time I think the United Nations might say, well, this is not a national problem, this is not a domestic affair (any longer), this is a problem for the world (to resolve) and that the world should exercise the right to take action.

"If we have that frame of mind, then we can do something when somebody refuses to accept help to put out the fires, for example," Mahathir said.

The prime minister said that at this moment "the UN can do nothing, but we should try persuasion"

He reckoned that the Indonesians too are suffering and perhaps this would lead to a more serious stance with regard to controlling forest fires in their country.